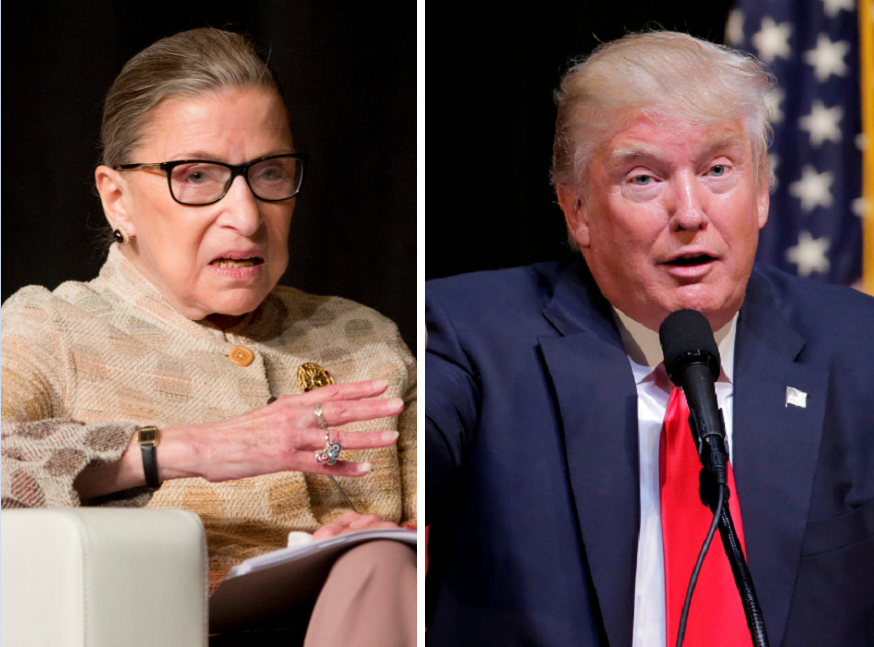 In a 1 a.m. tweet Wednesday, he said she "has embarrassed all by making very dumb political statements about me. Her mind is shot - resign!"

Trump had already hit back once Tuesday, in an interview with The New York Times, in which he said it was "highly inappropriate that a United States Supreme Court judge gets involved in a political campaign, frankly."

He said her words were "a disgrace to the court," and he called on her to apologize.

Ginsburg had told the Times in an interview published Sunday that she "can't imagine what the country would be -- with Donald Trump as our president." And while she implied his presidency would be bad for the country, she said he could have an even longer-term impact on the court.

"For the country, it could be four years. For the court, it could be -- I don't even want to contemplate that." As her late husband used to say, "'Now it's time for us to move to New Zealand,"' she told the Times.

She had told The Associated Press a couple of days earlier that "it's likely that the next president, whoever she will be, will have a few appointments to make." Ginsburg, the oldest justice on the court, is 83 years old; Anthony Kennedy is 79 years old (he'll be 80 this month) and Stephen Breyer is 77 (he'll turn 78 in August).

And in an interview with CNN posted Tuesday, Ginsburg called him a "faker" and complained about the fact that Trump has not released his tax returns.

"He is a faker," she said of Trump to CNN's Joan Biskupic. "He has no consistency about him. He says whatever comes into his head at the moment. He really has an ego. ... How has he gotten away with not turning over his tax returns? The press seems to be very gentle with him on that."