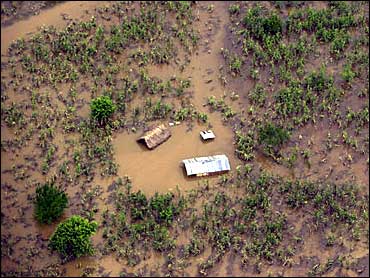 A light earthquake struck a flood-ravaged region along the Dominican-Haitian border on Saturday, but no damage or injuries were immediately reported.

The quake was not felt around the Dominican border town of Jimani. "If there was one, I don't know about it," said Lt. Matthieu Mollard, who was commanding French troops setting up tents for homeless flood survivors.

No immediate news was available from the Haitian side of the border, where the quake was centered, according to the Dominican Seismology Institute. Mountains up to 600 feet soar on the Haitian side just miles from Jimani.

The institute recorded a quake with a preliminary magnitude of 4.4 that lasted for four seconds on Saturday morning, according to Jose Luis German of the Dominican National Emergency Commission.

He said the epicenter was 20 miles underground and that most people probably did not feel it because it was deep and did not last long.

Such a quake can cause moderate damage in normal circumstances. But the area, in the south-central corner of Hispaniola island that is shared by Dominican Republic and Haiti, suffered torrential floods and mudslides this week that killed at least 1,100 people, according to conservative government tolls that account only for bodies recovered.

Troops from the U.S.-led multinational force in Haiti on Saturday were trying to recover bodies on both sides of the border.

People on the Haitian side could not be reached as submerged villages are cut off from the world except by helicopter, which the U.S. military has been using to ferry emergency aid to thousands of homeless and hungry survivors.

Landline and cellular telephones do not work in the area. The report from Jimani came from an Associated Press reporter using a satellite telephone.

With villages isolated by floodwaters, the U.S. military has been using helicopters to ferry emergency aid to thousands of homeless and hungry survivors.

Waters were expected to rise along with the death toll in what is being called "one of the worst natural disasters to hit the Caribbean," according to Secretary-General Cesar Gaviria of the Organization of American States.

U.S.-led troops including Marines, Canadians and Chileans ferried food, medicine, plastic sheeting for shelter and aid workers by helicopter to the worst-hit Haitian towns of Mapou and Fond Verrettes.

The Haitian Red Cross said 70 bodies were recovered from floodwaters in Mapou on Friday and they were searching for more.

Haiti's government reported recovering 592 bodies by Friday and the Dominicans 442. The Haitian count did not include the 70 bodies recovered at Mapou.

Forecasters urged people to get to high ground. That will be impossible for unknown hundreds stranded around Mapou, in a flooded valley surrounded by mountains where torrents early Monday collected silt, gravel and boulders, gathering speed as they brought down doom.

Aid workers handed out rice and beans and fresh water to survivors who said children appear to have suffered the biggest loss from flash floods and mudslides that cascaded down denuded mountains, submerging half the farming town of Mapou.

The international workers treated people who had broken limbs and gashes from aluminum roofs that tore away from homes when torrents barreled down Monday after three days of heavy rains. The Red Cross set up a clinic manned by two Cuban doctors.

But the emergency crews were working against time, warning of a possible epidemic and contaminated water supply if they do not quickly recover most bodies in the south-central part of Hispaniola island.

"It's horrific. People are finding people in very odd and unreachable places - even hanging from the tops of trees," Sheyla Biamby of U.S. Catholic Relief Services said.

Half the homes in Mapou - some 1,300 - have been destroyed and no one knows how many bodies remain underwater, Biamby said.

A group of Dominican doctors warned decomposing bodies were buried in mass graves that are too shallow and without protective plastic sheeting at the border town of Jimani.

"The contamination is already beginning to be felt," public health specialist Luis Roa told a radio station Friday, referring to the stench of death that shrouds the town of 12,000 people. "Sooner or later we're going to have to rebury them."

The National Emergency Commission said it has stopped looking for bodies in Jimani, but spokesman Jose Luis German said they still were searching a nearby saltwater lake crawling with crocodiles where dozens of bodies have washed up on an islet.

He said Dominican troops continued working Saturday with French troops to erect a tent camp for some 1,300 homeless Dominicans and Haitian refugees who had crossed the border to cut sugar cane or sell goods at the market.

French troops in the U.S.-led multinational force in Haiti hurried in a road convoy to Jimani on Friday, where they buried at least 23 bodies recovered from the lake.

Homes were buried over their roofs, only the tops of palm trees showing amid bobbing blobs believed to be bodies and carcasses of pigs and goats.

U.S. Marines "are looking at the possibility of airlifting bodies" for burial elsewhere, said Lt. Col. Duane Perry, who estimated that about a third of Mapou's 3,500 people had died.

"The magnitude of the disaster is much worse than we expected," said Guy Gavreau, director of the U.N. World Food Program in Haiti.

French Foreign Minister Michel Barnier visited Port-au-Prince on Friday and promised urgent aid and long-term help in reversing the deforestation that is the source of deadly floods and mudslides in Haiti, where impoverished people strip mountains of trees to make charcoal.

"We are providing food and water aid, but that is not enough," Barnier said.

"Every time there's a flood, it's always the same victims," he said. "We need to find a better place for them, and if the appropriate land is privately owned, the government must expropriate it."

The waters swept away the wife of Ivse Toussaint, 35, and all his six children, ages 2 to 16.

"The water was moving too fast," he said. "When it reached my head, I couldn't see the children and pulled myself through a window and up to the roof."