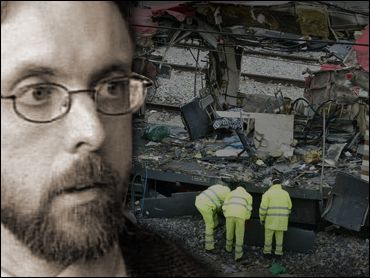 The Justice Department's watchdog office has opened an investigation into the arrest of an Oregon lawyer that was based on what turned out to be faulty FBI analysis of a fingerprint linked to the deadly terrorist attack in Spain last March.

Glenn A. Fine, the department's inspector general, said the antiterrorism Patriot Act may have been improperly used in the arrest of attorney Brandon Mayfield.

Mayfield, a Muslim convert and Kansas native, was arrested May 6 on a material witness warrant after an FBI analysis concluded he was a match for a fingerprint found on a bag containing detonators like those used in the attacks on trains in Madrid that killed nearly 200 people and wounded 2,000.

A few weeks later, Mayfield was released after the FBI admitted it had made a mistake and that the fingerprint did not match Mayfield's.

The inspector general's investigation was disclosed in a twice-a-year report to Congress on potential civil rights and civil liberties abuses by Justice Department officials. A copy of the report was obtained by The Associated Press on Monday, a day ahead of its scheduled public release.

The Mayfield investigation is focusing on how the fingerprint error was made and also on a complaint by Mayfield that the "FBI inappropriately conducted a surreptitious search of his home ... potentially motivated by his Muslim faith and ties to the Muslim community," according to Fine's report.

The Justice Department's Office of Professional Responsibility also is investigating the actions of prosecutors in the Mayfield case.

The Patriot Act, passed a few weeks after the Sept. 11, 2001, terror attacks, allows terrorism investigators to conduct unannounced searches like the one of Mayfield's home.

The Act also includes a provision authorizing the inspector general to review any complaints about civil liberties and civil rights abuses involving Justice Department personnel. The latest report covers the period between Dec. 16, 2003, and June 21, 2004.

During that time, the inspector general received 1,613 such complaints, the vast majority of which did not require investigation.

Nearly 1,000 of the complaints did not involve a Justice Department employee or included farfetched claims, such as that the government was interfering with a person's thoughts or pumping poisonous gas into someone's home. Another 410 complaints were outside the inspector general's jurisdiction, including claims of improper prison medical care and inadequate library facilities.

Of the remaining 208 complaints, only 13 were determined to warrant further review, including the Mayfield case.

Another case that prompted an investigation involves allegations by four people of Arab descent who say they were improperly detained by the FBI while trying to enter the United States. They were allegedly handcuffed, taken to an FBI office for questioning and "subjected to unnecessary humiliation," the report said.

A third case under review involves an Egyptian man who allegedly was detained after the Sept. 11 attacks and held without access to a lawyer.

The inspector general also continued to investigate seven cases opened during an earlier reporting period, some of which involve Muslim prison inmates who claim they were subjected to physical abuse and humiliation.

The report also said that the federal Bureau of Prisons had taken appropriate steps to correct problems cited in earlier reports, like the mistreatment of inmates at a detention facility in Manhattan.

After his release, Mayfield, a 37-year-old former Army lieutenant and convert to Islam, sharply criticized the government, calling his time behind bars "humiliating" and "embarrassing" and saying he was targeted because of his faith.

Karin J. Immergut, the U.S. attorney in Oregon, denied Mayfield had been a target because of his religion and maintained that the FBI had followed all laws in the case.

"The FBI apologizes to Mr. Mayfield and his family for the hardships that this matter has caused," the bureau said in a statement. The agency also said it would review its practices on fingerprint analyses.

Mayfield, , was released last week. But he was not altogether cleared of suspicion; the government said he remained a material witness and put restrictions on his movements.

The case began when FBI fingerprint examiners in Quantico, Va., searched for possible matches to a digital image of a fingerprint found on a bag of detonators the day of the Spanish bombings on March 11.

The system returned 15 possible matches, including prints belonging to Mayfield, on file from a 1984 burglary arrest in Wichita, Kan., when Mayfield was a teenager.

Three separate FBI examiners narrowed the identification to Mayfield, according to Robert Jordan, the FBI agent in charge of Oregon. A court-appointed fingerprint expert agreed.

As additional evidence in support of Mayfield's arrest, the FBI pointed to Mayfield's attendance at a local mosque, his advertising legal services in a publication owned by a man suspected to have links to terrorism, and a telephone call his wife placed to a branch of an Islamic charity with suspected terrorist ties.

They also noted that Mayfield represented a man in a child custody case who later pleaded guilty to conspiring to help al Qaeda and the Taliban fight U.S. forces in Afghanistan.

During one raid on Mayfield's house, FBI agents took Mayfield's computers, modem, safe deposit key, assorted papers, as well as copies of the Koran and what they classified as "Spanish documents" — apparently Spanish homework by one of Mayfield's sons.

Mayfield, who runs a small Portland law office, was never facing any formal charges. He was arrested as a material witness, and held in the Multnomah County Detention Center on the chance that he might have information about the Spain bombings.

Mayfield was made to stay in the same jail as men awaiting arraignment on murder charges. A prison guard told him: "You should watch your back."