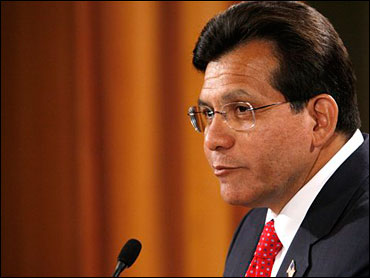 While serving as attorney general, Alberto Gonzales mishandled top secret documents, risking the release of classified information about two of the Bush administration's most sensitive counterterrorism efforts - a surveillance program and detainee interrogations.

Mishandling classified materials violates Justice Department regulations and removing them from special secure facilities without proper authorization is a crime. But a report issued Tuesday by the Justice Department's inspector general says the agency decided not to press charges against Gonzales, who resigned under fire last year.

Lawyers for Gonzales acknowledge he did not store or protect the top secret documents - a set of handwritten notes about the surveillance program and 17 other papers - as he should have. But they say he did not intentionally risk letting unauthorized people see them, and say there's no evidence that occurred.

The report by Justice Department Inspector General Glenn A. Fine is the latest taking Gonzales to task for mismanagement at the department during his 31 months as attorney general. The criticism could foreshadow the results of an ongoing investigation by Fine's office about Gonzales' role in the 2006 firings of nine U.S. attorneys. That inquiry is expected to be finished within months.

"Like all other department employees, Gonzales was responsible for safeguarding classified materials, familiarizing himself with the facilities available to him ... for storing these materials and observing the rules and procedures for the proper handling of classified materials," Fine's report stated. "Our investigation found that Gonzales did not fulfill these obligations and instead mishandled highly classified documents about the NSA surveillance program and a detainee interrogation program."

"NSA" stands for National Security Agency, which ran a controversial surveillance program that let investigators eavesdrop on terror suspects and people believed to be their associates.

At issue is how, and where, Gonzales stored the documents, which are classified as sensitive compartmentalized information, or SCI.

SCI materials are among the highest and most sensitive levels of classified top secret documents and usually relate to national security cases. They are supposed to be stored only in special safes or facilities that can be accessed only by certain people with SCI security clearances.

At the Justice Department, however, Gonzales kept the documents in a safe in a fifth-floor office in the attorney general's suite - which is not considered an SCI facility. In August 2007, investigators found, the safe was searched by two employees who did not have SCI clearances but who looked through it "document by document" for papers requested through the Freedom of Information Act.

Additionally, the report found, Gonzales also took some SCI documents - specifically, the notes about the surveillance program - to his house in suburban Virginia as he was moving from his secure counsel's office at the White House in early 2005 to the Justice Department.

Although he initially said he believed he kept the documents in a safe at his home, Gonzales later told investigators that he did not know the combination of the safe. He said he may have kept the papers in his briefcase and did not always lock it.

In a response to the report, Gonzales' lawyers indicated the former attorney general was merely forgetful or unaware of the proper way to handle the top secret papers.

However, Tuesday's report showed Gonzales was briefed on how to properly handle SCI material both while at the White House and at the Justice Department.

As a result of the security breach, Gonzales could lose any remaining security clearances he may still have. Fine's investigators alerted the NSA and the Justice Department's internal security officials to alert them that the top secret information may have been compromised.

Fine also referred the case to prosecutors at the Justice Department's National Security Division to see if charges should be brought against Gonzales. It is a misdemeanor for U.S. government employees to knowingly remove classified documents from authorized areas without proper permission.

But the department decided against prosecuting Gonzales after an internal review that began earlier this year, said Justice Department spokesman Dean Boyd.

"After conducting a thorough review of the matter and consulting with senior career officials inside and outside of the division, the NSD ultimately determined that prosecution should be declined," Boyd said in a statement.