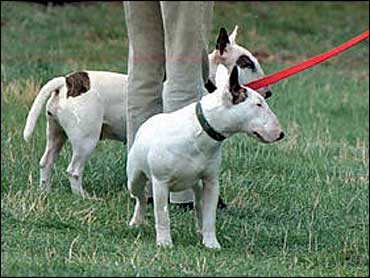 Britain's Princess Anne will send her dog to an animal psychologist to avoid having it euthanized after it attacked a royal maid and fatally mauled one of Queen Elizabeth II's beloved corgis, the Sunday Telegraph reported.

Psychologist Roger Mugford said he expected to begin work with Florence, the bull terrier, next week. Mugford said that he believed the attacks were related to an underlying medical factor.

"We are not talking about an inherently aggressive or dangerous dog," Mugford was quoted as saying in newspaper. "I am sure it is just a dog who is feeling a bit out of sorts about something, perhaps pain or old age, and is feeling a bit cranky on the day."

Though the story has had tongues wagging across the land, Buckingham Palace has refused to comment on whether Florence would be put down.

The royal maid, 55-year-old Ruby Brooker, was treated for a minor bite following Saturday's attack at the royal Sandringham estate in eastern England, the palace said.

Interviewed on The Early Show Monday morning, royal watcher Victoria Mather made some tongue-in-cheek comments that demonstrate the glee that had greeted this story in Britain. Mather called it "the best Christmas story ever.

"It's a completely crazy story," Mather told co-anchor Harry Smith, adding, "Isn't it ironic the only member of the royal family to get therapy, except for Princess Diana, is a dog."

"But you know what it's like, the dog becomes like its owner," she said. "It's not the dog's fault, but the Princess Royal's fault, for being such a cross person."

Wouldn't the queen, a dog lover herself, understand?

"I suspect the queen has no more control over her dogs than she does over her children," Mather said. "But at least the dogs have always - they are acquiescent."

The royal watcher lapsed into giggles when considering what Christmas must have been like at the royal estate at Sandringham.

"Imagine if you walked in and you just murdered your mother's favorite dog. Not a good start. Blood on the carpet," Mather joked.

Referring to the way the blame was being shifted from one dog to the next, she spoke of a cover-up and gleefully called on Scotland Yard to investigate.

Originally, reports said the bull terrier Dotty was responsible for attacking the queen's dog Dec. 22 . But after it was reported that the other bull terrier, Florence, has bitten the maid, Buckingham Palace corrected earlier reports and said Florence also had attacked the corgi.

Why did it take so long for Dotty to be cleared and Florence handed the rap? Some in Britain are speculating that Dotty killed the corgi and Florence attacked the maid but that Anne, fearing she might lose both her beloved dogs to lethal injections, decided it would be best to spread the blame.