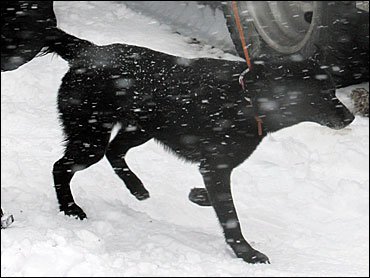 For three climbers stranded on Mount Hood, survival came down to a live transmitter and a warm dog.

Covering up with two sleeping bags, a tarp and a black Labrador named Velvet as winds howled around them at up to 70 mph, two women and a man beamed signals to rescuers who were able to fix their precise location.

Rescuers say the dog's body warmth probably saved the climbers' lives, reports CBS News correspondent Jerry Bowen. One climber was taken to a hospital for a head injury; Velvet, the Black Lab, was checked out, too.

On CBS News' The Early Show, Bob Alexander of Mountain Rescue, part of the team that brought the climbers back to safety, described the conditions on the mountain as "pretty miserable."

"It was high winds, blowing snow, temperatures in the 20s," Alexander said.

After Velvet helped the climbers through the night on the 11,239-foot mountain, radio transmitters the size of sunglasses cases led rescuers to the group.

The three were taken away in an ambulance late Monday, with Velvet leaping in behind them. The climbers were expected to be fine.

"I'm really glad (the rescuers) were there for us. They did an incredible job. They were amazing," said Matty Bryant, Velvet's owner.

Velvet, a Labrador-shepherd-cattle-dog mix, was adopted by Bryant after she jumped into his car two years ago during a Nevada climbing trip, reports The Oregonian newspaper. She took turns lying atop the climbers through the night.

The transmitting devices, called Mountain Locator Units, are available for rental around the Mount Hood area. While lauding the dog, search leaders also gave due credit to the devices and the climbers' use of them.

"The most important part of this rescue is that they did everything right," said Lt. Nick Watt of the Clackamas County Sheriff's Office.

Brian Bate, operations supervisor of the REI outdoors store in downtown Portland, said mountaineers can rent the units for $5 a climb — for a party of eight, that means $40.

But the devices are set up only to transmit, not to receive, Bate said. And the signal is received only by the Clackamas County sheriff's office, at the base of Mount Hood, and then only when the department is looking for a climber, he said.

Three climbers who became stranded on Mount Hood in December did not have such a locating device. One climber made a cell phone call to his family, but the phone went dead within days. The three climbers stranded this week had cell phones, as well as global-positioning devices that helped rescue teams home in on them.

"We're soaking wet and freezing," said one of two rescued women Monday as she walked from a tracked snow vehicle to the ambulance.

One of the women, age 26, whose name was not released, was taken to a Portland hospital and being treated for a head injury, said Jim Strovink, sheriff's spokesman.

Velvet was treated Monday night at DoveLewis Emergency Animal Hospital in Portland for broken toenails and a cut on one paw.

"Velvet is a wonder dog," said Trevor Liston, one the climbers.

The party was separated when the three climbers slipped off a ledge at about 8,300 feet, slid about 500 feet down an incline and later moved from the site of the fall.

Their five companion climbers made it off the mountain Sunday and were reported in good condition.

Liston was the fourth climber on the line, said at a news conference that the three climbers in the lead were holding onto a rope when they slipped over the ledge. The dog was clipped to the rope and was also dragged down, he said.

"The lead climber went," and "two people right behind him didn't have enough time to react," Liston said.

The climber behind Liston grabbed him, or he might have gone over the edge, too.

Rather than attempt a rescue, the climbers decided to use a cell phone to call authorities, Liston said.

"It's a very hard decision to make," but "we didn't want to have eight people fall instead of three," Liston said.

About 10,000 climbers attempt to scale Mount Hood annually. One to three of them die each year. During the past 25 years, more than 35 climbers have died on Mount Hood, one of the most frequently climbed mountains in the world, reports CBS News correspondent Stephan Kaufman.