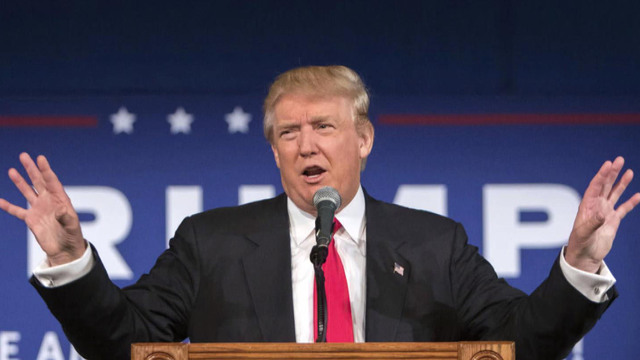 As the first Republican debate approaches, Donald Trump, the businessman-turned-politician currently leading national polls, is landing squarely in the cross-hairs of many GOP candidates.

"I'm going to clearly push back and I'm going to push back hard" against Trump, former Texas Gov. Rick Perry promised in an interview on "Fox News Sunday."

The Republican presidential candidate, who has himself been the target of heavy Trump criticism, brushed off his competition's recent popularity.

"I'd say those issues that he has talked about, we've been talking about for a long time," Perry told host Chris Wallace. "This is an individual who has extraordinary celebrity. But I'm not going to be quiet, Chris, when Donald Trump shoots a bullet through John McCain and hits veterans, particularly those that have been captured."

Perry, referring to Trump's comments that Arizona Sen. John McCain was only considered a military hero because he was captured and held as a prisoner of war, called it "one of the low moments of this campaign from my perspective."

"I'll challenge Donald Trump," Perry said. "I'm not going to be quiet about that."

Perry also defended his comments that named Trump a "cancer on conservatism."

"When you look back at the positions that he has held, it is not in concert with conservatism," the Texas Republican said. "And I think, you know, regardless of whether he's a celebrity--and there are a lot of people that are following him today--I'm going to stand up for conservatism."

Kentucky Sen. Rand Paul had harsh words for Trump earlier this week, attributing Trump's rise in national polls to "a temporary sort of loss of sanity."

But Paul dialed back his criticism of the candidate Sunday, telling CNN that he believed Trump was tapping into a "vein of anger, yes, that represents some of those who are thinking about Donald Trump." But, the Kentucky Republican said, that doesn't mean candidates should continue to engage in "empty talk."

"I think there's also going to be a serious debate, ultimately, starting this week, in the presidential debates, about who has the ideas that would fix the country," Paul said Sunday. "Instead of getting so far afield in a lot of, I think, maybe empty talk, maybe we ought to talk about, should we have a flat tax?"

Others in the Republican party, rather than criticize Trump, want instead to see how his candidacy plays itself out.

"I think that Donald is going to be as serious a candidate as Donald wants to be," New Jersey Gov. Chris Christie told CNN Sunday. "And he's going to determine, through the depth of his answers and the seriousness of his answers, whether he's a serious candidate or he isn't."

But Christie warns that a long game still matters.

"Anybody can do well for a month in this business, especially if you have talent and you have personality," the New Jersey Republican added. "And Donald has both those things. So, let's see how it goes over the course of time."

But at least one candidate feels it's wiser to just stay mum on the subject of the casino magnate.

Ohio Gov. John Kasich, who entered the presidential race last week, refused Sunday to engage in conversation about the billionaire in the race.

"I have enough to do to get my message out to people and if I'm spending my time talking about somebody else or something else, like I am right now, then I'm not telling you how I was the chairman of the House Budget Committee that balanced the federal budget," Kasich said.

Kasich was also asked to comment directly on a controversial tweet his top political strategist, John Weaver, sent about Trump. Weaver likened prepping for a debate with the real estate magnate as "a NASCAR driver mentally preparing for a race knowing one of the drivers will be drunk."

But the Ohio governor distanced himself from the Trump attack, saying, that it was "not the way we operate."

"We're basically sort of like the engine that just keeps going along," Kasich said. "And, you know, we don't appreciate stuff like that. I don't think you'll see anymore of that."