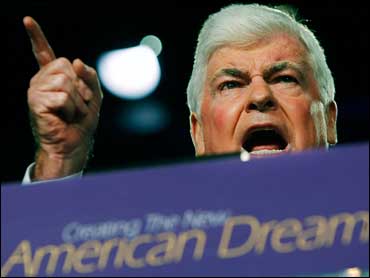 Clinton has described her 1990's attempt to remake the nation's health care system in personal terms rather than acknowledging it for the policy failure it was, Dodd said in an hourlong interview with The Associated Press.

"It should be far more than just a parable of personal growth and maturation. This was about an issue that was critically important to the county," Dodd said. "It was a major effort that failed. There were a lot of reasons that it failed, not the least of which it was mismanaged terribly at the time."

Clinton unveiled a plan for universal health care this week, and has touted her first effort to reform health care as evidence of her experience dealing with the complex issue. She often tells audience she has the scars to show for that effort.

Dodd took issue with that approach.

"Not everyone succeeds in everything they try to do. But if you're going to highlight experiences, they ought to reflect the ability to produce results rather than what you tried and failed at," he said.

The Connecticut senator also said he was surprised that Tom Vilsack, the former Iowa governor and co-chairman of Clinton's presidential campaign, had said Republican Rudy Giuliani's personal life was a likely campaign issue. The former New York mayor has been married three times and has publicly acknowledged being estranged from his two children.

Dodd suggested that the Clinton campaign was courting danger given President Clinton's impeachment stemming from an affair with a White House intern.

"I'd be careful about opening up boxes here that could come back to haunt you," Dodd told the AP. "We went through an impeachment process here. We have to be careful about hurling stones ... Once you start down that road it can get ugly."

Dodd, 62, has struggled to break through in a Democratic field dominated by the star power of Clinton and Barack Obama.

"I"d like to be doing better than competing with the margin of error in the polling data," he quipped, but said his campaign is going well in Iowa and New Hampshire and he'd have enough money to compete in those early voting states.

Dodd has raised $7.3 million in the campaign so far and projected he'd raise $2-3 million more in the fundraising period that ends Sept. 30. He lamented the need to raise so much money to compete. "You lose good people in the process" he said.

The 26-year Senate veteran said he felt frustrated by aspects of campaigning for president, such as the myriad debates and forums that demand sound-bite answers to complex questions.

"I think it belittles the office, I think it demeans candidacies. I think it's shrinking the process instead of expanding it," he said. But he said he had a new appreciation of the kitchen table meetings and other aspects of retail politicking required in the early states.

Dodd touched on a range of issues, including the Iraq war, the mortgage crisis and his relationship with colleagues.

On Iraq, Dodd said it appeared that democracy had failed in the war-torn country. "We all love democracy, but be careful of what you wish for in that part of the world," Dodd said, citing the 2006 Palestinian elections that brought sweeping victory for Hamas. He said many experts predict that free elections in Jordan and Egypt would lead to overwhelming victory for the Islamic Brotherhood or jihadists.

Dodd, the Senate Banking Committee chairman, said he welcomed the announcement by Treasury Secretary Henry Paulson that the administration would consider allowing the mortgage finance giants Fannie Mae and Freddie Mac to temporarily buy, bundle and sell as securities home loans exceeding $417,000, known as "jumbo" loans. The idea, which represents a policy change for the Bush administration, is portrayed as a way to inject liquidity into the stretched mortgage market.

"It's a 180-degree turn from where they were," Dodd said. "What it is, is a recognition that the problem was much more serious. ... I'm glad the administration is beginning to change. I'm hoping they'll do more."

Dodd said he worked well with senators of both parties and believes those relationships would be an asset as president. He said that if elected, he would probably invite a bipartisan group of colleagues to dinner at the White House within a week of being sworn into office.

Dodd is close to Massachusetts Sen. Edward Kennedy and said he has asked him repeatedly for his endorsement. Kennedy's two sons, Ted Jr. and Rhode Island Rep. Patrick Kennedy, have both campaigned for Dodd and he's gotten help from Kennedy's sister, Eunice Shriver, as well.