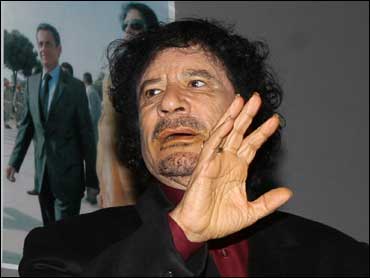 The suit against Gadhafi, who is on a controversial six-day visit to France, comes six months after France's first lady at the time brought home the six medical workers from Libya in a high-profile diplomatic coup.

The six had been serving life sentences on charges that they had deliberately infected more than 400 school children with the AIDS virus, a case that drew criticism and headlines worldwide.

The doctor, Ashraf al-Hazouz, filed the lawsuit in Paris based on France's adherence to a 1984 international convention allowing national jurisdictions to carry out legal action against anyone suspected of torture who comes to France, said al-Hazouz's lawyer Francois Cantier.

In March 2001, France's highest court ruled that Gadhafi, as a serving head of state, could not face legal action in connection with a lawsuit over the 1989 bombing of a French UTA passenger jet that killed 170 people.

Gadhafi met Wednesday with French President Nicolas Sarkozy, who has faced criticism for the warm welcome provided to the Libyan leader. The two men discussed France's push for a European-Mediterranean partnership, among other issues, a presidential spokesman said.

Gadhafi's trip has clinched contracts worth billions of dollars for French business.

"We are welcoming Col. Gadhafi in Paris because we want to help countries that have chosen to break with terrorism" and "because the Bulgarian nurses were freed," Fillon said.

On Tuesday, Gadhafi fed the controversy over his visit in a television interview, denying that he and Sarkozy had discussed the need for human rights progress in Libya.

During a Cabinet meeting, Sarkozy insisted that he broached the subject with Gadhafi, government spokesman Laurent Wauquiez said. Jean-Marie Bockel, a junior minister, said he heard Sarkozy raise the topic at dinner Monday.

"Col. Gadhafi didn't talk about (human rights), but he heard the president talk about them," Bockel said.

Sarkozy has said Gadhafi should be rewarded because he renounced state sponsorship of terrorism and his pursuit of weapons of mass destruction, and should be encouraged in his quest for international respectability.

"I told him, 'We are going to accompany you on the path to a new respectability, because you have abandoned the demons of the past,"' Sarkozy said in an interview with Le Nouvel Observateur magazine.

Sarkozy is the first Western leader to offer an official visit since Gadhafi's falling-out with the West in the 1980s.

Protests over his visit started even before Gadhafi arrived. They grew larger Tuesday when he entered the grounds of the National Assembly, considered a symbol of democracy and human rights.

More than half the 80 lawmakers invited to the session at the speaker's residence boycotted the event, at which Gadhafi first evoked his theme of a "new era" for Libya and the world.