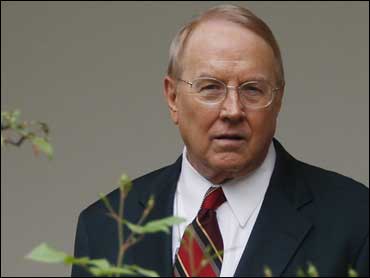 As Barack Obama broadens his outreach to evangelical voters, one of the movement's biggest names, James Dobson, accuses the likely Democratic presidential nominee of distorting the Bible and pushing a "fruitcake interpretation" of the Constitution.

The criticism, to be aired Tuesday on Dobson's Focus on the Family radio program, comes shortly after an Obama aide suggested a meeting at the organization's headquarters here, said Tom Minnery, senior vice president for government and public policy at Focus on the Family.

The conservative Christian group provided The Associated Press with an advance copy of the pre-taped radio segment, which runs 18 minutes and highlights excerpts of a speech Obama gave in June 2006 to the liberal Christian group Call to Renewal. Obama mentions Dobson in the speech.

"Even if we did have only Christians in our midst, if we expelled every non-Christian from the United States of America, whose Christianity would we teach in the schools?" Obama said. "Would we go with James Dobson's or Al Sharpton's?" referring to the civil rights leader.

Dobson took aim at examples Obama cited in asking which Biblical passages should guide public policy - chapters like Leviticus, which Obama said suggests slavery is OK and eating shellfish is an abomination, or Jesus' Sermon on the Mount, "a passage that is so radical that it's doubtful that our own Defense Department would survive its application."

Dobson and Minnery accused Obama of wrongly equating Old Testament texts and dietary codes that no longer apply to Jesus' teachings in the New Testament.

"I think he's deliberately distorting the traditional understanding of the Bible to fit his own worldview, his own confused theology," Dobson said.

"... He is dragging biblical understanding through the gutter."

Joshua DuBois, director of religious affairs for Obama's campaign, said in a statement that a full reading of Obama's speech shows he is committed to reaching out to people of faith and standing up for families. "Obama is proud to have the support of millions of Americans of faith and looks forward to working across religious lines to bring our country together," DuBois said.

Dobson reserved some of his harshest criticism for Obama's argument that the religiously motivated must frame debates over issues like abortion not just in their own religion's terms but in arguments accessible to all people.

He said Obama, who supports abortion rights, is trying to govern by the "lowest common denominator of morality," labeling it "a fruitcake interpretation of the Constitution."

"Am I required in a democracy to conform my efforts in the political arena to his bloody notion of what is right with regard to the lives of tiny babies?" Dobson said. "What he's trying to say here is unless everybody agrees, we have no right to fight for what we believe."

The program was paid for by a Focus on the Family affiliate whose donations are taxed, Dobson said, so it's legal for that group to get more involved in politics.

Last week, DuBois, a former Assemblies of God associate minister, called Minnery for what Minnery described as a cordial discussion. He would not go into detail, but said Dubois offered to visit the ministry in August when the Democratic National Convention is in Denver.

A possible Obama visit was not discussed, but Focus is open to one, Minnery said.

McCain also has not met with Dobson. A McCain campaign staffer offered Dobson a meeting with McCain recently in Denver, Minnery said. Dobson declined because he prefers that candidates visit the Focus on the Family campus to learn more about the organization, Minnery said.

Dobson has not backed off his statement that he could not in good conscience vote for McCain because of concerns over the Arizona senator's conservative credentials. Dobson has said he will vote in November but has suggested he might not vote for president.

Obama recently met in Chicago with religious leaders, including conservative evangelicals. His campaign also plans thousands of "American Values House Parties," where participants discuss Obama and religion, as well as a presence on Christian radio and blogs.