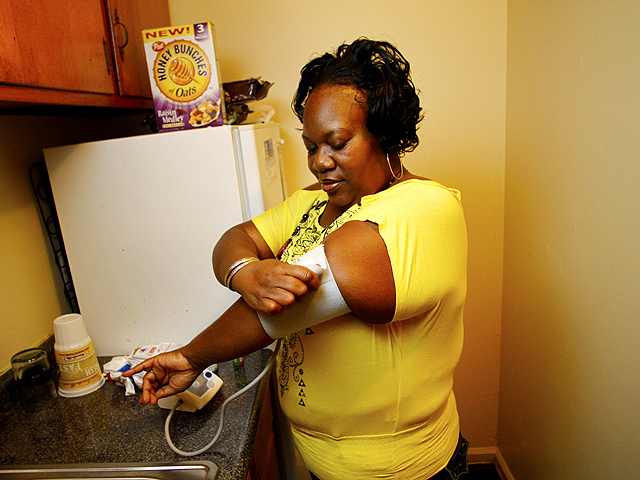 (CBS/AP) Is robust health a matter of real estate? New research shows that women who move to affluent areas are a lot less likely to become obese or develop diabetes than those living in poor neighborhoods.

The study kicked off in the 1990s, when federal officials offered thousands of poor women in city public housing a chance to live in affluent neighborhoods. Cut to 10 years later, and the relocated women had lower rates of diabetes and extreme obesity.

The experiment started out as a $70 million housing study in Baltimore, Boston, Chicago, Los Angeles and New York, aimed at finding out whether moving impoverished families to wealthier neighborhoods could improve employment or schooling. But the changes to these women's health are what took the study in a new direction.

The differences seem small but are significant - and offer some of the strongest support for the idea that where you live affects your overall health.

"This study proves that concentrated poverty is not only bad policy, it's bad for your health," said Shaun Donovan, secretary of the Department of Housing and Urban Development.

Donovan said new ways must be found to help families "break the cycle of poverty that can quite literally make them sick."

For the 4,500 women study - published in the Oct. 19 issue of the New England Journal of Medicine - 1,800 women who were living in public housing in neighborhoods where 40 percent of residents were poor were offered vouchers to live in subsidized private housing in higher-income areas where fewer than 10 percent of residents were poor. They were required to live there for at least a year.

The remaining women received either housing vouchers they could use in any neighborhood or did not receive any vouchers, with the expectation they would stay put in public housing. Ten years later, the women were weighed and given blood tests.

The women who moved to richer areas had the lowest rates of extreme obesity and diabetes. A person's risk for diabetes or extreme obesity dropped nearly 20 percent by moving to a wealthier neighborhood.

The study notes that even the women who moved were not exactly the healthiest, given 14 percent of them were extremely obese - twice the national average for women.

The study also had its flaws.

Because it did not start out looking at health, the women's medical condition and weight were not checked early on. The researchers believe the women in the different groups were about the same, because they matched up indicators, such as age, race and education, but that is still an assumption. Also, only about half the women offered a chance to move to a more prosperous zip code did so. And many who did move left after a year.

Regardless, the authors aren't certain what caused the health improvements, but have several theories.

The study authors also said poorer neighborhoods have fewer doctors' offices and suggested the long-term stress of living in such an environment may alter weight-controlling hormones.

"There was too much violence, too much going on in the `hood. It wasn't safe," said Vickie Webb, who lived in the projects in Durham, N.C., for several years before a housing agency helped relocate her and her husband to a better neighborhood.