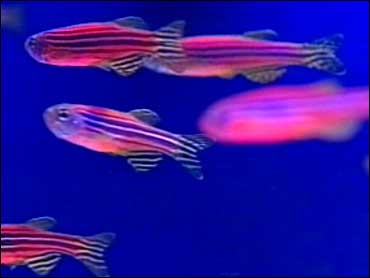 Up to now, if you wanted a wide variety of colorful fish in your tank, you had to do it in saltwater, and a saltwater tank is complicated and expensive.

But thanks to science, that's all changing. The Early Show resident veterinarian Debbye Turner reports on the changes, and the debate surrounding them.

At first glance, they look like any other fish in a tropical aquarium: small, pretty, almost ordinary. But if you take a closer look, you'll see these are "enlightened" fish.

They are called glofish, the first-ever genetically engineered pet.

Alan Blake of Yorktown Technology explains, "The glofish is a fluorescent zebra fish. It is bright red under regular room light. And in a dark room under black light, it will appear to glow in the dark."

Blake's company licensed the glofish for distribution in the U.S.

He says, "The fish was originally developed at the national university of Singapore by a scientist. The idea was to create fish that would be able to detect environmental pollutants."

They are regular zebra fish with the addition of DNA from the brightly colored sea anemone, like the one featured in "Finding Nemo."

Typically, freshwater fish are not that vibrant. In fact, some are artificially dyed or "painted" to give them more dazzling color. But that color is only temporary. The glofish are the first freshwater fish to have a permanent color job.

Bill Niehoff of BTL Jungle Pets says, "It's something new that they can add to their tanks and it's different from what they used to have. And it's pretty. It makes it more decorative."

The pet shop owner thinks the glofish will get a warm reception from tropical fish owners.

A little girl at his store named Lauren was not that impressed. And many conservation groups are not amused.

Joseph Mendelson, legal director for the Center of Food Safety, notes, "It could have irreversible consequences."

He says, "The issues with genetically engineered fish are the establishment of a new invasive species in the environment, that has never been there before, that could present problems to existing marine fish."

Time will tell if people want glofish mixed in with their goldfish.

Asked if it is really necessary to have a fish that glows, Jen, a woman with children says, "Necessary, no. But I think the kids will enjoy it."

The controversy will continue. The glofish are banned in the state of California. Most opponents don't object to the glofish specifically, but say that it opens the floodgates for many more genetically engineered pets.