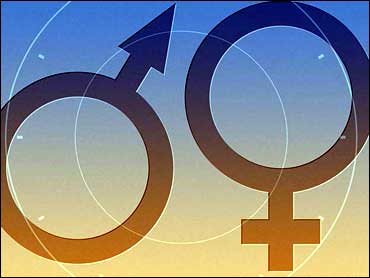 "We used measures of sexual arousal to explain true sexual feeling," Rieger tells WebMD. "In men, there is no good evidence that something like a true bisexual attraction is out there."

Rieger and Bailey are looking in the wrong place for men's sexual identities, says Sheeri Kritzer, a Bisexual Resource Center board member. Identity, she says, comes from above the ears, not below the belt.

"The whole point of sexual identity is it is a validation of who you are," Kritzer tells WebMD. "This study perpetuates the idea that men are studs, that they go with whatever turns them on. It goes on the old stereotype that men think with their [penises]."

Sexologist Paula Rodriguez Rust, PhD, is the editor of the 1999 book "Bisexuality in the United States." She says a person's sexual orientation is not determined merely by genital arousal.

"Sexual response is not everything we think of when we think of sexual orientation," Rodriguez Rust tells WebMD. "Bisexuality clearly exists."

Bailey's sexuality research tends to draw fire. His 2003 book on transsexual men, "The Man Who Would Be Queen," is still under attack from some in the transgendered community.

Last year, Bailey, Rieger, and others published a study in which they measured female sexual arousal. They concluded that women — whether they identify themselves as homosexual or heterosexual — have bisexual arousal patterns. That's because the genitals of women participating in the study became aroused when they watched porn, regardless of whether it featured men or women.
Men, they say, are different. The current study, reported in the current issue of Psychological Science, enrolled 30 heterosexual men, 33 bisexual men, and 38 homosexual men. Nine of the heterosexual men, 11 of the bisexual men, and 13 of the homosexual men did not become genitally aroused by the videos and were dropped from the final analysis.

The men indicated how aroused they felt by moving a lever up or back. Their genital arousal was measured by an elastic device attached to their penises.

Bisexual men said they were turned on by both sets of videos — but their genitals responded to one or the other, not to both.

"The majority of bisexual men got aroused to men and only to men," Rieger says. "All those who didn't look like gay men looked like heterosexual men: They got aroused to women. This study fits the picture that ... men are very target-specific. They have an object of their sexual desire and go for that. ... The pattern is that they have this object specificity — it does not change."

Weitzman questions both the study methods and Rieger's interpretation of the data.

"The study methods are poor," she says. "It is such a small sample size. To make these conclusions on so few people, that is not good science. Unfortunately, this has gotten much more media play than it deserves. If you torture the data, they will confess to anything. It does not mean there are no bisexual men."
Kritzer, too, questions the study design. She points to the large number of men who were not genitally aroused during the study.

None of the study's flaws is fatal, says Rodriguez Rust. The problem is with Kritzer and Bailey's interpretation.

"The problem with the article is that the findings have been misinterpreted," Rodriguez Rust says. "If you look at the study data, they actually do not show an absence of bisexual sexual response in men. A number of study subjects clearly did respond to both males and females. The study's conclusion — that it remains to be demonstrated that men have a bisexual response — is curious, because it is not supported by the findings."

Who We Are, What We Do, What Turns Us On

"We make a distinction between identity, behavior, and attraction," Rieger says. "Identity is how you perceive yourself. Behavior is what you do. And attraction is what I consider your true sexual feelings for your own sex or for a member of the opposite sex."

Rieger says that for most homosexual and heterosexual men, these three aspects of sexuality are the same. That's not the case for men who say they are bisexual — even if they have sex with both men and women.
"Bailey and I have this approach that sexual attraction is what really defines your sexual orientation: what feelings, actual feelings, do you have?" Rieger says. "In men, there is no good evidence that something like a true bisexual attraction is out there."

That's not true for women, he says.

"Women seem to have a bisexual physiological arousal pattern. Whether homosexual or straight, they show bisexual arousal. It does not seem to be related to what they really are interested in. This is very different from what we find in guys."

Weitzman says Bailey and Rieger oversimplify the many elements that determine a person's sexual orientation. She points to the Klein Sexual Orientation Grid, a tool that some psychologists use to determine a person's sexual orientation. Many factors go into this determination: attraction, behavior, fantasies, emotional preference, social preference, lifestyle, and self-identification.

Kritzer says bisexuals often encounter hostility both from the gay/lesbian community and from heterosexuals.

"The Bailey article speaks to a growing trend where bisexuality is seen as a negative thing," she says. "They think we are like unicorns, that we're fabled but don't really exist. This is creating an environment where it isn't even safe to come out in the gay community. But I say when a person who is gay or straight, and finds another person and has a loving relationship, we should be glad, whatever sex that other person may be."

"Bisexuality is very interesting because it challenges the way people think," she says. "It makes people comfortable to think that this study shows bisexuality doesn't exist. But this is completely a misinterpretation."