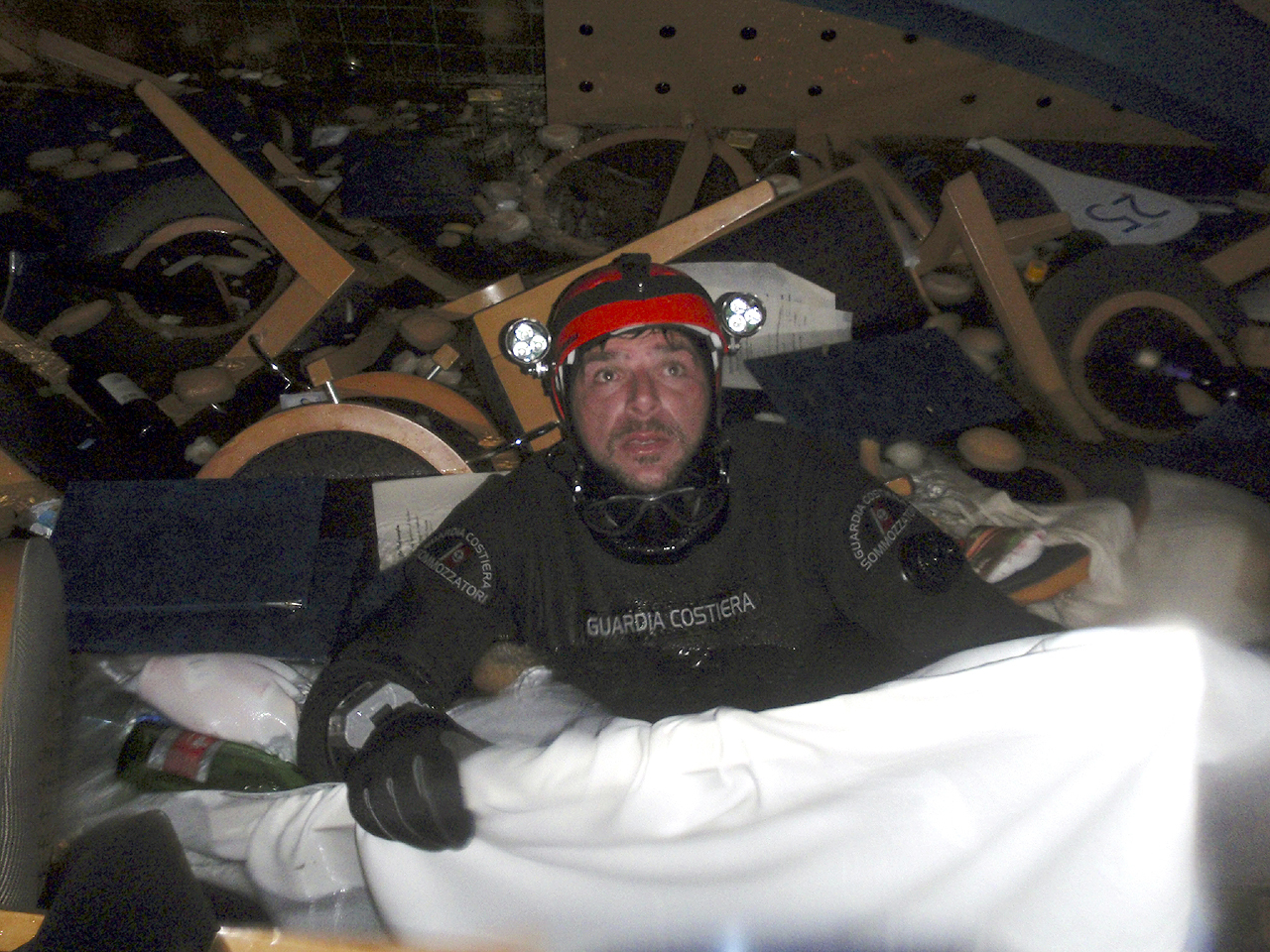 ROME - Italian naval divers on Tuesday exploded holes in the hull of a cruise ship grounded off a Tuscan island to speed the search for 29 missing people while seas were still calm. One official said there was still a "glimmer of hope" that survivors could be found.

Prosecutors, meanwhile, prepared to question the captain, who is accused of causing the wreck that left at least six dead and abandoning the Costa Concordia before all 4,200 people onboard were safely evacuated after the vessel capsized Friday night.

The divers set four microcharges above and below the surface of the water, Busonero said. Television footage showed one hole above the waterline to be less than 6 feet in diameter.

"The hope is that the ship is empty and that the people are somewhere else, or if they are inside that they found a safe place to await rescue," Coast Guard spokesman Filippo Marini told Sky TV 24

The cruiseliner tragedy also has turned into a potential environmental crisis, with rough seas battering the stricken ship raising fears that fuel might leak into pristine waters off Giglio that are part of a sanctuary for dolphins, porpoises and whales.

Waters were relatively calm Tuesday with waves of just a foot, but they were expected to reach 6 feet Wednesday, according to meteorological forecasts.

Italian officials have released a list of the nationalities of the cruise ship passengers and crew who remain missing four days after the Costa Concordia capsized. Officials said Tuesday that they are 14 Germans, six Italians, four French, two Americans, one Hungarian, one Indian and one Peruvian.

Family members have identified the Americans as Jerry Heil, 69, and his wife Barbara, 70, from White Bear Lake, Minnesota.

Italian Coast Guard official Marco Brusco said Tuesday there was still "a glimmer of hope" survivors could still be found on parts of the vast cruise liner not yet searched. The last survivor, a crewman who had broken his leg, was rescued Sunday.

The ship is carrying some 500,000 gallons of fuel on board. To date there's been no word of any leaks, but choppy waters that slightly shifted the wreckage on Monday escalated fears of one and suspended rescue operations for several hours.

The ship's operator, Costa Crociere SpA, has enlisted one of the world's leading salvagers, Smit of Rotterdam, Netherlands, to handle the removal of the 1,000-foot cruise liner and extract the fuel safely.

The cruise operator has said Capt. Francesco Schettino strayed from the ship's authorized course into waters too close to the perilous reef. The navigational version of a "fly by" was apparently a favor to the chief waiter who is from Giglio and whose parents live on the island, local media reported.

A judge is to decide Tuesday if Schettino should stay jailed. Prosecutor Francesco Verusio called Schettino's maneuver "reckless" and "inexcusable."

Miami-based Carnival Corp., which owns the Italian operator, estimated that preliminary losses from having the Concordia out of operation at least through 2012 would be between $85 million and $95 million, along with other costs. The company's share price slumped more than 16 percent Monday.

Costa Crociere chairman and CEO Pier Luigi Foschi said the company would provide Schettino with legal assistance, but he disassociated Costa from his behavior, saying it broke rules. "Capt. Schettino took an initiative of his own will which is contrary to our written rules of conduct," Foschi said.

The Coast Guard said Schettino defied their entreaties to return to his ship as the chaotic evacuation of some 4,200 people was in progress. After the ship's tilt put many life rafts out of service, helicopters plucked to safety dozens of people still aboard, hours after Schettino was seen leaving the vessel.

He noted that 4,200 people managed to evacuate a listing ship at night within two hours. In addition, the ship's evacuation procedures had been reviewed last November by an outside firm and port authorities and no faults were found, he said.