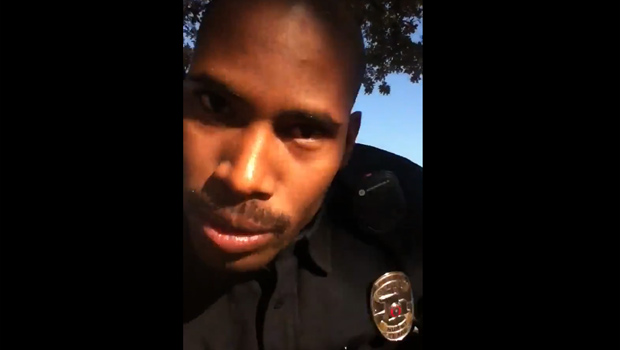 (CBS) HURST, Texas - Disraeli Arnold, a Hurst police officer, has been suspended indefinitely - the equivalent of being fired - after an investigation determined that the officer violated department rules in an outburst caught on tape, CBS DFW reports.

The internal affairs investigation concluded that Arnold "was disrespectful to a citizen, used indecent, profane, and harsh language in the performance of his official duties, and conducted himself in a manner which brought discredit to himself and the Hurst Police Department," according to a release by the City of Hurst obtained by CBS DFW.

It did, however, state that the amount of force used by Arnold "was reasonable based upon his perception when he arrived to assist Officer Jimenez."

The suspension Arnold has received is the equivalent to a termination from the police department, according to Assistant Police Chief Steve Niekamp.

On Nov. 20, 2012, Officer Arnold came to the aid of a fellow officer who was struggling with 17-year-old Andrew Rodriguez. The teenage suspect was told he was going to jail for an outstanding warrant, when he began to call his mother.

According to Police Chief Steve Moore, Rodriguez started to walk away and ignore Officer Miguel Jimenez, who called for backup for a suspect resisting arrest.

The cell phone video, taken by 17-year-old Jordan Rojas, appears to show the late-arriving Officer Arnold tackling the teenager, who was already on the ground. The tape also shows Arnold repeatedly cursing at Rodriguez, and asking him at least three times if he wanted to die.

According to Kelly Pope, Rodriguez's mother, the outstanding warrant was from a ticket her son had received four years ago for trespassing on school property after hours, CBS DFW reports.

Prior to the incident, Arnold had received mostly positive reviews for his work for the department and was referred to by superiors as a "team player" interested in being promoted to supervisor, the station says.