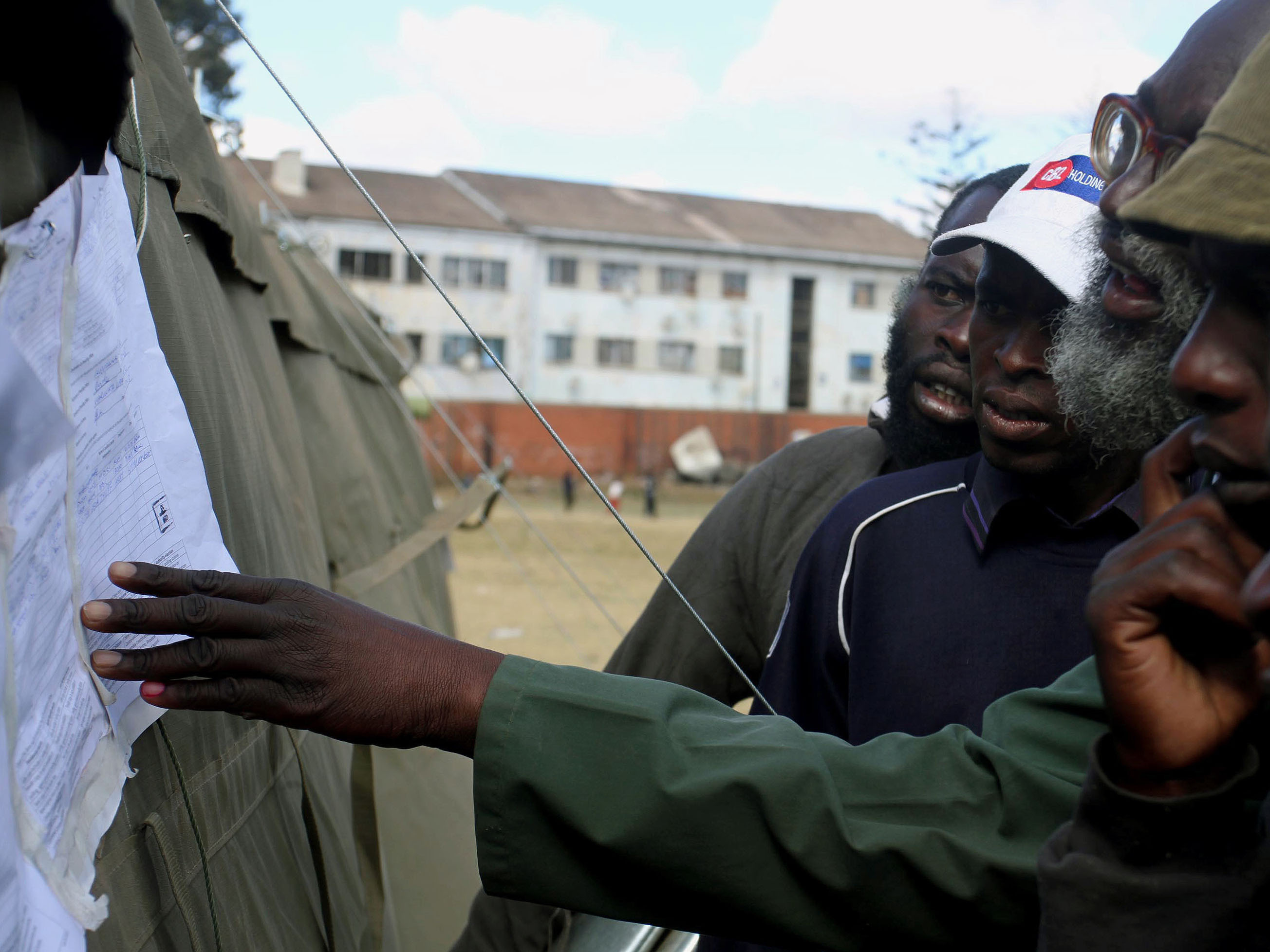 HARARE, Zimbabwe Allegations of vote-rigging flowed in Zimbabwe on Thursday, with reports of fake registration cards, voters turned away from the polls and people appearing on voters' lists four times with different IDs. Even before results were announced, the main opposition camp said longtime President Robert Mugabe stole the election, which his supporters denied.

Either way, the country faces fresh political uncertainty. Prime Minister Morgan Tsvangirai, the main challenger to Mugabe, said the elections on Wednesday were "null and void" due to violations in the voting process, and a poll monitoring group that is not affiliated with the state also said the poll was compromised by a campaign to stop voters from casting ballots.

The elections posed one of the biggest challenges to Mugabe's 33-year grip on power on this former British colony, but claims by his opponents that the election was tainted and declarations of victory by the president's supporters suggested his political career was far from over.

Tsvangirai boycotted a presidential run-off vote in 2008 to protest violence against supporters but said in the run-up this year he was confident Zimbabweans would vote for change, even in the most difficult conditions.

"The shoddy manner in which it has been conducted and the consequent illegitimacy of the result will plunge this country into a serious crisis," Tsvangirai said of the election Wednesday.

Tendai Biti, a top official in Tsvangirai's party, said even rural residents were told to pretend they were illiterate, and therefore had to be assisted in casting their ballots by officials loyal to Mugabe.

"We dismiss these allegations with the contempt they deserve because there was absolutely no way of manipulating the system. There was no way of rigging the election," he said.

Zimbabweans braced for tense days ahead. Tsvangirai's party urged supporters not to take to the streets or gather at an open field nicknamed "Freedom Square," its main Harare rallying point, compared by many to Cairo's Tahrir Square, the focal point of Egyptian demonstrations since the ouster of President Hosni Mubarak in 2011.

The conditions in Zimbabwe are different, though. Mugabe has a strong support base, security forces have traditionally been quick to clamp down on overt dissent and after the 2008 election, Tsvangirai's Movement for Democratic Change joined Mugabe's ZANU-PF party in an uneasy coalition that was regionally brokered.

The coalition ended with the election on Wednesday.

The MDC said in a statement that it received "radical" calls from supporters reflecting "the frustration, hopelessness and anger in every one of us" to actively fight Mugabe's party.

"We understand the tears in everyone's eyes but we certainly do not believe in violence to resolve this," it said.

Tsvangirai's last campaign rally in the open field, opposite the main courthouse in downtown Harare, drew some 50,000 jubilant followers on Monday, in sharp contrast to Mugabe's austere, muted campaign gatherings.

Thabani Nyoni, a civic activist and top researcher at the Crisis in Zimbabwe Coalition, an alliance of 70 rights and pro-democracy groups, predicted that protests against election irregularities would likely emerge once official election results have been confirmed.

The state election commission has promised a full tally of results by Monday. No results have yet been announced.

Voter Matthew Pfuri, a Harare car salesman, said he was shocked by early results coming from polling stations where, under electoral law, summaries are posted outside when initial vote-counting is complete. Mugabe supporters have claimed early, unconfirmed results show them with a decisive lead.

"Maybe it's a good outcome for Tsvangirai. People now know what they are up against and say this blatant abuse can't last much longer," Pfuri said.

Extra police, some in riot gear, were deployed in Harare. One truck of riot police was parked down the street from Tsvangirai's party headquarters.

"If Mugabe's party is celebrating a clean sweep in the elections, why are they sending out trucks of riot police?" asked Jonah Matanga, a nearby street vendor.

Mugabe's party said Thursday it has withdrawn an unauthorized message on its Twitter feed claiming a resounding victory:

The ZANU-PF party said it is awaiting the release of results by the state election commission, the only body allowed under the law to announce the outcome.

Solomon Zwana, head of the Zimbabwe Election Support Network, said it found a "wide range of problems" in the election and that the poll was compromised by a campaign to stop voters from casting ballots. The monitoring group says as many as 1 million out of more than 6 million eligible voters were not on voters' lists.