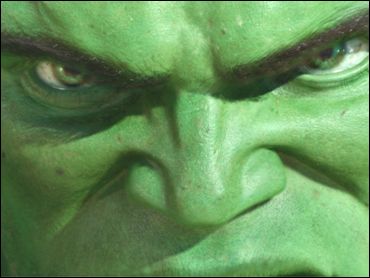 "Leave Hulk ALONE!" the Marvel superhuman most in need of anger management likes to say.

It's difficult to come up with two more competing takes on American life than those built by Walt Disney on one hand and Marvel Comics on the other. Here are distinctly opposite versions of the American experience, each an indelible part of the country's popular culture.

In this corner: Disney's America, a pastoral vision built upon one man's idealized memory of his small-town childhood, filled with trains and friendly people and dreams that really do come true if you believe hard enough. A world of black and white, rendered in brilliant Kodachrome.

In this corner: science run amok, reluctant superheroes transformed by radioactive spider bites and weird cosmic rays, costumed avengers who are in therapy, struggle to pay the bills and grouse about their superhuman lot. Shades of ambiguous gray, drawn in color-drenched shadows.

The contrasts are stark and sometimes way too easy: New York vs. the Magic Kingdom. Wishing and dreaming vs. struggling and coping. Doe-eyed sincerity - literally, in Bambi's case - vs. the worldly wisecracking of Spider-Man and the Thing.

Now this group must somehow form a family. The Walt Disney Co.'s announcement this month that it will purchase Marvel Entertainment Inc. for $4 billion does far more than consolidating two entertainment giants. It weds two of the dominant sets of myths that inform modern America.

"It's almost as if, decades ago, they made these decisions about America. And one decided that America stops in the 1950s and the other decides that America plunges into a dark, chaotic future," says John Baick, a historian at Western New England College who studies Disney's role in American culture.

The foundation of the Disney universe is late 19th-century middle America grafted onto fairy tales and transmogrified into fantasy. It's no coincidence that, in Disney's theme parks, strolling up "Main Street USA" leads you straight to the Magic Kingdom's Cinderella Castle. Not so subtle, that Walt.

The iconography is potent, and it's difficult to tell whether nostalgia made Disney so popular or vice-versa. And while the Disney myth has been updated only slightly, the High School Musicals and Hannah Montanas keep it vibrant in the 21st century.

Marvel, just as distinctly American, is an example of what cultural historian Leo Marx called "the machine in the garden" - in effect, what industrialization did to Thomas Jefferson's vision of a nation of farmers.

Though its roots date to 1939, the ambiguous, morally murky Marvel universe as we know it dates - surprise - to the beginning of the 1960s, when nonconformity was busting out all over. That was an intentional move to ground Marvel in real-world details while much entertainment, Disney and DC included, was operating in a cultural Never Never Land.

Fan letters printed alongside Marvel's earliest superhero stories of the sixties - the Fantastic Four, the Incredible Hulk and Spider-Man - lauded editors for serving up protagonists who were insecure, combative and bewildered about their new powers.

Contrast that with Disney, which represented comforting 1950s monoculture and well-defined, tidy resolutions. Imagine, for example, what a 10-year-old boy who saw "The Shaggy Dog" at a movie theater in 1959 would have made of a copy of the dystopian Fantastic Four issue No. 1 when it came out two years later as he approached puberty's confusion.

"The Marvel of the 1960s was in its own way the counterpart of the French New Wave and the foreign innovators in film," Peter Sanderson wrote in 2003 in his "Comics in Context" online column. "Marvel was pioneering new methods of comics storytelling and characterization, addressing more serious themes, and in the process keeping and attracting readers in their teens and beyond."

Marvel was a fresh narrative force in another respect: It was postwar, post-atomic and eventually postmodern.

It cast America as a place where science spins out of control, where heroes are not manor-born Princes Charming (or, for that matter, small-town-bred Supermen) but reluctant, sometimes resentful saviors. Even the flag-draped Captain America, the most Boy Scoutish of Marvel's heroes, was engineered from an experiment with a World War II-era supersoldier serum.

Of course, the overarching plotline of both Marvel and Disney is this: America is a factory of mass-produced myths, and now the means of production is being consolidated.

"We can be completely comfortable in describing what Disney does, what Marvel does, what television and music labels do, as the culture industry," says Robert Thompson, director of the Center for the Study of Popular Television at Syracuse University.

"The very nature of genre - Western, action-adventure, police procedural - these are product lines," Thompson says. "Genre makes it possible to churn out stories like we used to turn out Chevys. And we're a lot better at churning out stories these days than we are at turning out Chevys."

We're also better at compartmentalizing them. And that's illuminating, too.

In the world of Disney, monsters are something separate, something that couldn't possibly be of us. In Marvel's universe, the monsters can stare back from the mirror, and we're never quite sure what separates ally from foe - whether we're each just one bad day away from supervillainy.

Thus the two sides of the American narrative - the comfortable certainty of unfettered goodness and the never-resolved question of whether we have unleashed too much power. Yesterday and tomorrow. Rural and urban. Red state and blue state, even.

"Are we these Jeffersonian yeoman farmers? Or are we Manhattanites, running around with our little devices and communicating with the world and doing 15 different things at once?" wonders Alexander T. Riley, a Bucknell University sociologist who studies how religion and patriotism merge in American memory.

"They inhabit the same universe now," he says. Of course: We're both - Disney and Marvel, farm and market, blackberry and BlackBerry. A corporate joining it may be, but it's a pretty handy metaphor, too.

Because for better or worse in America, the machine is now in the garden and there's no going back. It's a whole new world for sure.