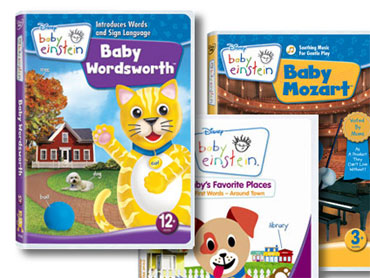 The Walt Disney Co. is expanding a refund program for its "Baby Einstein" videos for toddlers in response to challenges about the legitimacy of its educational claims.

The company upgraded a customer satisfaction program beginning last month by explicitly offering cash refunds on any DVDs bought from June 5, 2004 to Sept. 4.

Buyers can also exchange DVDs for a "Baby Einstein" book or music CD, or receive 25 percent off a "Little Einstein" product. The offer expires March 4.

The Campaign for a Commercial-Free Childhood, a Boston-based advocacy group, claimed "victory" Friday in its years-long battle to protect consumers from falsely believing the videos could, for example, teach words to babies under 2 years old.

"We believe that this is an acknowledgment that baby videos are not educational," said Susan Linn, a psychologist and director of the campaign.

The campaign complained to the Federal Trade Commission in May 2006, saying claims made on "Baby Einstein" packaging and the Web site were not supportable by scientific research.

At the time, the Disney subsidiary removed some wording from the packages and took down testimonials that claimed educational benefits from the videos on the Baby Einstein Web site.

The commission decided in December 2007 to take no formal action after investigating the matter.

Unsatisfied, the campaign brought its material to a group of Boston lawyers, which threatened a class-action lawsuit against Disney in a letter to CEO Robert Iger in June 2008.

The upgraded refund policy dates back to the same date requested in the letter by the lawyers, led by attorney Edward Broderick, but it's unclear if the move settles the threatened lawsuit.

Broderick did not return messages seeking comment. A Disney spokesman could not clarify if the refund upgrade removed the threat of further legal action.

In a release, The Baby Einstein Company called the campaign's statements "peppered with revisionist history," and emphasized that its consumer satisfaction program has been clearly identified on its Web sites since 1999 and on packaging since 2008.

The company was founded in 1997 by Julie Ainger-Clark, a mother and former educator, and was bought by Disney in 2001.

To participate in the Baby Einstein refund, click here.