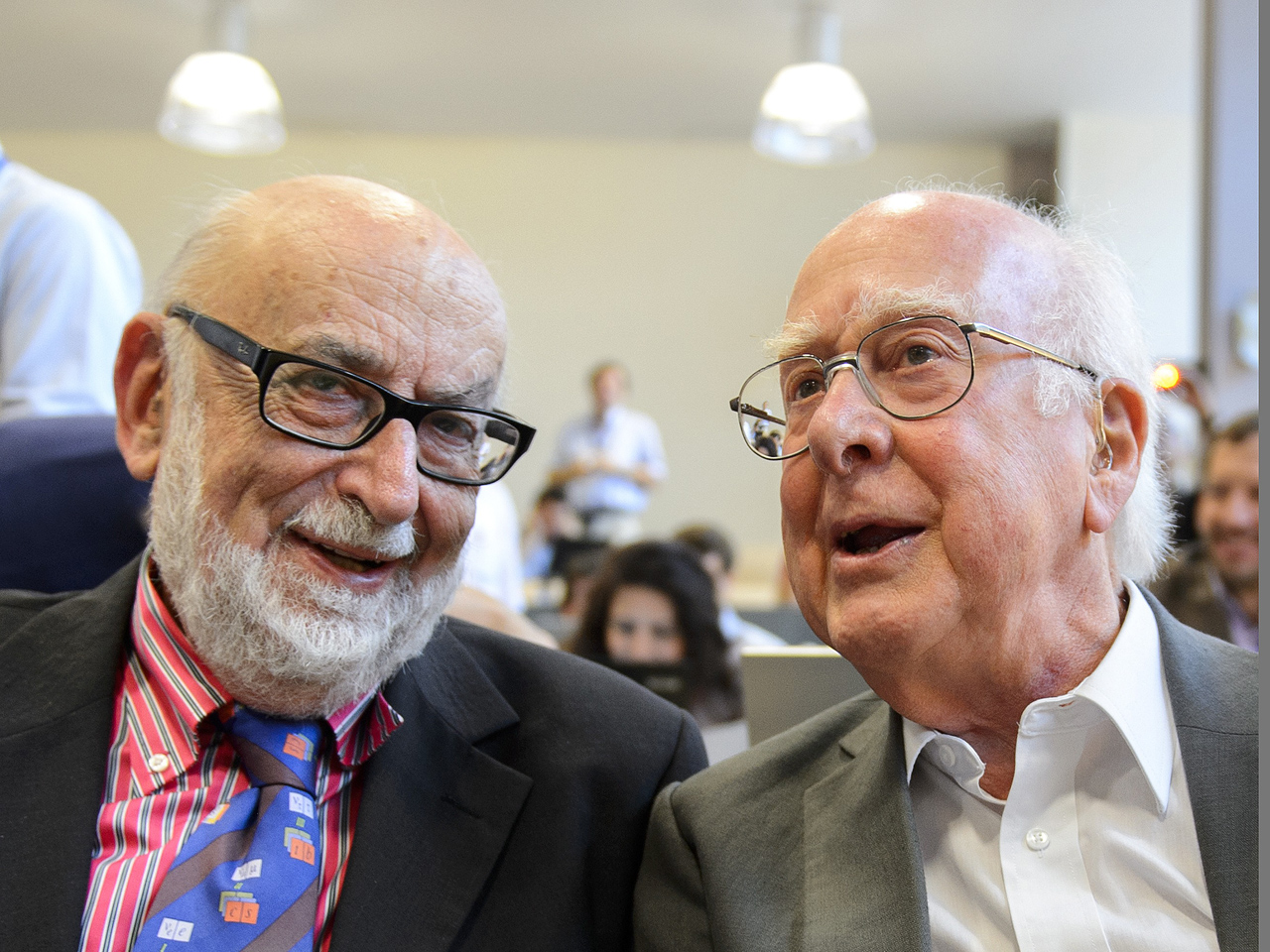 STOCKHOLM Francois Englert of Belgium and Peter Higgs of Britain won the 2013 Nobel Prize in physics on Tuesday for their theory on how the most basic building blocks of the universe acquire mass, eventually forming the world we know today.

Their concept was confirmed last year by the discovery of the so-called Higgs particle, also known as the Higgs boson, at CERN, the European Organization for Nuclear Research in Geneva, the Royal Swedish Academy of Sciences said.

"I am overwhelmed to receive this award and thank the Royal Swedish Academy," the 84-year-old Higgs said in a statement released by the University of Edinburgh, where he is a professor emeritus. "I hope this recognition of fundamental science will help raise awareness of the value of blue-sky research."

"Of course I'm happy," the 80-year-old Englert told reporters, thanking all those who helped him in his research.

Asked whether he could have imagined getting a Nobel Prize when he started the research 50 years ago, he said no.

"You don't work thinking to get the Nobel Prize, that's not how you work," Englert said. "(Still) we had the impression that we were doing something that was important, that would later on be used by other researchers."

The announcement, which was widely expected, was delayed an hour, which is highly unusual. The academy gave no immediate reason, other than saying on Twitter that it was "still in session." The academy decides the winners in a majority vote on the day of the announcement.

Staffan Normark, the permanent secretary of the academy, said the academy had tried to reach Higgs on Tuesday but "all the numbers we tried he did not answer." He wouldn't say if that's why the announcement was delayed.

By just awarding the men behind the theoretical discovery of the particle, the prize committee avoided the tricky issue of picking someone at the CERN laboratory to share the award. Thousands of scientists were involved in the experiments that confirmed the particle's existence last year.

The Nobel award can only be split by three people.

Academy member Ulf Danielsson noted that the prize citation also honored the work done at CERN, even though it didn't single out any of its scientists.

"This is a giant discovery, it means the final building block in the so-called standard model for particle physics has been put in place, so it marks a milestone in the history of physics," Danielsson said.

Englert and Higgs theorized about the existence of the particle in the 1960s to provide an answer to a riddle: why matter has mass. The tiny particle, they believed, acts like molasses on snow - causing other basic building blocks of nature to stick together, slow down and form atoms.

But decades would pass before scientists at CERN were able to confirm its existence in July 2012. To find it, they had to build a $10 billion collider in a 17-mile (27-kilometer) tunnel beneath the Swiss-French border.

This discovery was huge to the scientific community because it gave validity to The Standard Model of Physics, which is authoritative theory for particle physics. The only element or particle that is part of the Standard model and hasn't been discovered is the Higgs boson, until now.

"I'm thrilled that this year's Nobel Prize has gone to particle physics," said CERN Director General Rolf Heuer. He added that the discovery of the particle at CERN last year "marks the culmination of decades of intellectual effort by many people around the world."

In the CERN cafeteria, applause broke out and champagne bottles popped. Heuer gave a brief speech and told everyone to applaud themselves for their work.

The Higgs particle solved a problem that physicists had puzzled over for some time: how did matter form shortly after the Big Bang, eventually leading to the universe as we know it today? The explanation scientists came up with centers on the idea of an invisible field that pervades the universe. As particles travel through the field, they are slowed down like a ball rolling through molasses. If this is the case then it should be possible to detect a type of particle, dubbed the Higgs boson, where the fields clump together.

Yet finding the particle - often referred to as the "God particle" - required teams of thousands of scientists and mountains of data from trillions of colliding protons in the world's biggest atom smasher - CERN's Large Hadron Collider. The device produces energies simulating those 1 trillionth to 2 trillionths of a second after the Big Bang.

Only about one collision per trillion will produce one of the Higgs bosons in the collider, and it took CERN some time after the discovery of a new "Higgs-like" boson to decide that the particle was, in fact, very much like the Higgs boson expected in the original formulation, rather than a kind of variant.

The phrase "God particle" was coined by Nobel Prize-winning physicist Leon Lederman, but it's disliked by most physicists because it connotes the supernatural. Lederman said later that the phrase - mostly used by laymen as an easier way of explaining the theory - was really meant to convey that he felt it was the "goddamn particle," because it proved so elusive.

Michael Turner, president of the American Physical Society, an organization of physicists, said the Higgs particle captured the imagination of the public.

"If you're a physicist, you can't get in a taxi anywhere in the world without having the driver ask you about the Higgs particle," said Turner, a cosmologist at the University of Chicago.

He said the finding of the Higgs completed the standard model, which is a basic picture of how physics operates on Earth. But beyond that, he said, it represents the first in a class of particles that scientists think played a role in shaping the universe. That means it points the way to tackling mysteries like the nature of so-called dark energy and dark matter.

The physics prize was the second of this year's Nobel awards to be announced. On Monday, the Nobel Prize in medicine was given to American scientists James Rothman, Randy Schekman and Thomas Sudhof for discoveries about how key substances are moved around within cells.

The prizes, established by Swedish industrialist and Alfred Nobel, will be handed out on Dec. 10 - the anniversary of his death in 1896. Each prize is worth 8 million Swedish kronor ($1.2 million).

How much is too much? Setting a plan for kids' screen time