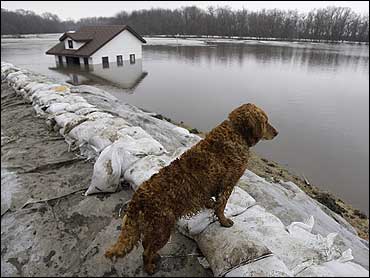 President Barack Obama declared flood-stricken North Dakota a federal disaster area on Wednesday as some living along the Missouri River evacuated their homes and others worked on sandbagging and shoring up its banks.

Demolition crews blasted a huge ice jam in the river in a bid Wednesday to open a channel, like pulling out a giant plug to drain a flood threatening the state capital of Bismarck.

"We are cautiously optimistic," Bismarck Mayor John Warford said after the string of explosives went off. He said officials would have a better assessment Wednesday night, but said water appeared to be moving.

Water backing up behind the dam of car-size ice blocks already had forced the evacuation of about 1,700 people from low-lying areas in Bismarck.

The flood threat intensified after the region was hit Tuesday by a blizzard.

Some 200 miles east of Bismarck, officials also called for more sandbagging volunteers in Fargo, and its cross-river neighbor, Moorhead, Minnesota, where the Red River was projected to crest Friday evening.

Complicating the battle against the river are falling snow, and freezing temperatures, reports CBS News weather anchor Dave Price. Up to 6 inches of new snow is now raising flood projections another foot to 41 feet - 23 feet over flood stage - a new record for a region that know flooding all too well.

"This one is unusual because of all the things the weather is throwing at us," says Fargo Mayor Dennis Walager. "So if we survive this one we're very lucky."

Luck, aided by a Herculean effort. By Wednesday night, Price reports the city hoped to have put in place nearly 2 million sandbags, with the help of more than 30,000 volunteers from the Northern Plains, along with prison inmates and 750 national guardsmen. Together they have built some 15 miles of dikes, some as high as 12 feet, hoping to keep the river in its place.

The ice jam threat, created by ice flowing down the Heart River, was made up of chunks of ice up to 3 feet thick and the size of small cars, said Assistant Water Commission Engineer Todd Sando.

A second ice jam about 10 miles upstream of Bismarck was also a concern, holding back a growing reservoir. The National Weather Service posted a flash flood warning for a three-county area, saying the integrity of that ice jam, was unpredictable.

"The fact that it could break at any time is bad news," Bismarck Mayor John Warford said at a morning news conference.

Obama's declaration means the federal government will pay 75 percent of state and local government costs for the flood fight.

Sand supplies briefly ran out in Fargo early Wednesday because icy roads made travel difficult for a Minnesota supplier.

More sandbagging was planned in part of Grand Forks, the city hardest hit by a massive Red River flood in 1997. An elaborate dike system was built after that disaster.

The blizzard had blocked hundreds of miles of highways in Montana, Wyoming, South Dakota, North Dakota and Nebraska. The southwestern North Dakota town of Marmarth reported 22.5 inches of snow and up to 2.5 feet of snow fell in South Dakota's rugged Black Hills.