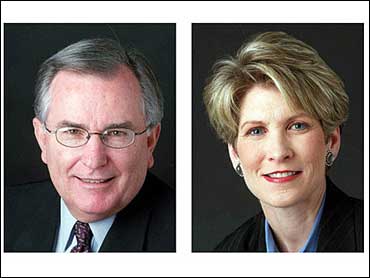 Whoever wins the race for mayor of Dallas could take office under an ethical cloud.

The district attorney in neighboring Fort Worth has been called in to investigate allegations the two candidates offered to buy the endorsement of a third, defeated contender by paying off his campaign debt.

Laura Miller and Tom Dunning will meet in a runoff Feb. 16 for the right to succeed Democratic Mayor Ron Kirk, whose legacy in the nation's ninth-largest city includes big projects like a $420 million sports arena and the redevelopment of blighted south Dallas.

The two candidates - both Democrats - had been promoting a more back-to-basics approach that emphasized street repairs, parks and crime-fighting. But that was before the money-for-endorsement accusations overshadowed the campaign.

In the five-way mayoral election Jan. 19, Miller, a muckraking former newspaper columnist and City Council gadfly, led with 49 percent, while Dunning, an insurance executive, got 38 percent. State Rep. Domingo Garcia was third with about 11 percent.

Because no one got the 50 percent required to win the mayor's office outright, the top two vote-getters advanced to a runoff.

The money-for-endorsement controversy erupted about a week ago after a Garcia supporter told a Spanish-language radio station that before Garcia would endorse Dunning, white business leaders would have to make a commitment to help retire Garcia's campaign debt.

Garcia later endorsed Dunning; both men denied they had cut any deal.

Garcia then countered that Miller and her husband, a state lawmaker, had offered to pay off Garcia's debt in return for his endorsement. They denied it, with Miller declaring: "I would never, ever offer anything to Domingo Garcia. I wouldn't even buy him lunch."

Dunning, 59, and Miller, 43, said they welcome the investigation and will open their personal and campaign records.

"We will be as accommodating as we need to be," Dunning told The Associated Press on Thursday. "There were no deals struck and I'm confident they will find this out very soon."

Miller said she hopes the investigation will be completed before the runoff, so voters know the truth before they cast their ballots.

"I think it's time that the public knows what kind of politics are going on behind the scenes," said the former councilwoman. "Dirty deals around local elections have been going on for years. The reason I'm running for mayor is I don't like dirty deals."

Karen Lundquist, general counsel for the Texas Ethics Commission, said that under Texas law, the case could be construed as bribery, a felony punishable by up to 10 years in prison and a $10,000 fine.

"There are no cases that I'm aware of that would extend the bribery law to an endorsement," she said. But he added: "Certainly, the interpretation is possible."

For his part, Garcia said he used his own money to pay off his campaign debt, the size of which he would not disclose. "I'm absolutely sure that when the investigation is terminated, both myself and Mr. Dunning will be cleared of any improprieties," he said.

Kirk, a Democrat, resigned in November to seek the seat being vacated by Republican Sen. Phil Gramm. The victor in the mayor's race will serve out the rest of Kirk's term, which runs through May 2003.

Miller, a vocal critic of Kirk's ambitious projects, is running a populist campaign promising to shake up City Hall and focus on basic services. Dunning has argued that he is a better consensus builder.

Albert West, a 33-year-old mental health professional, said he voted for Dunning, but in light of the money-for-endorsement allegations, he will do more research before casting his ballot Feb. 16.

"I'm not real happy with either one," West said. "Neither one of them is shooting straight."

"When people start slinging mud at each other, it confuses the issue and makes you think less of both of them. It sounds like a bunch of kids on a playground," he said.

By Susan Parrott © MMII The Associated Press. All Rights Reserved. This material may not be published, broadcast, rewritten, or redistributed