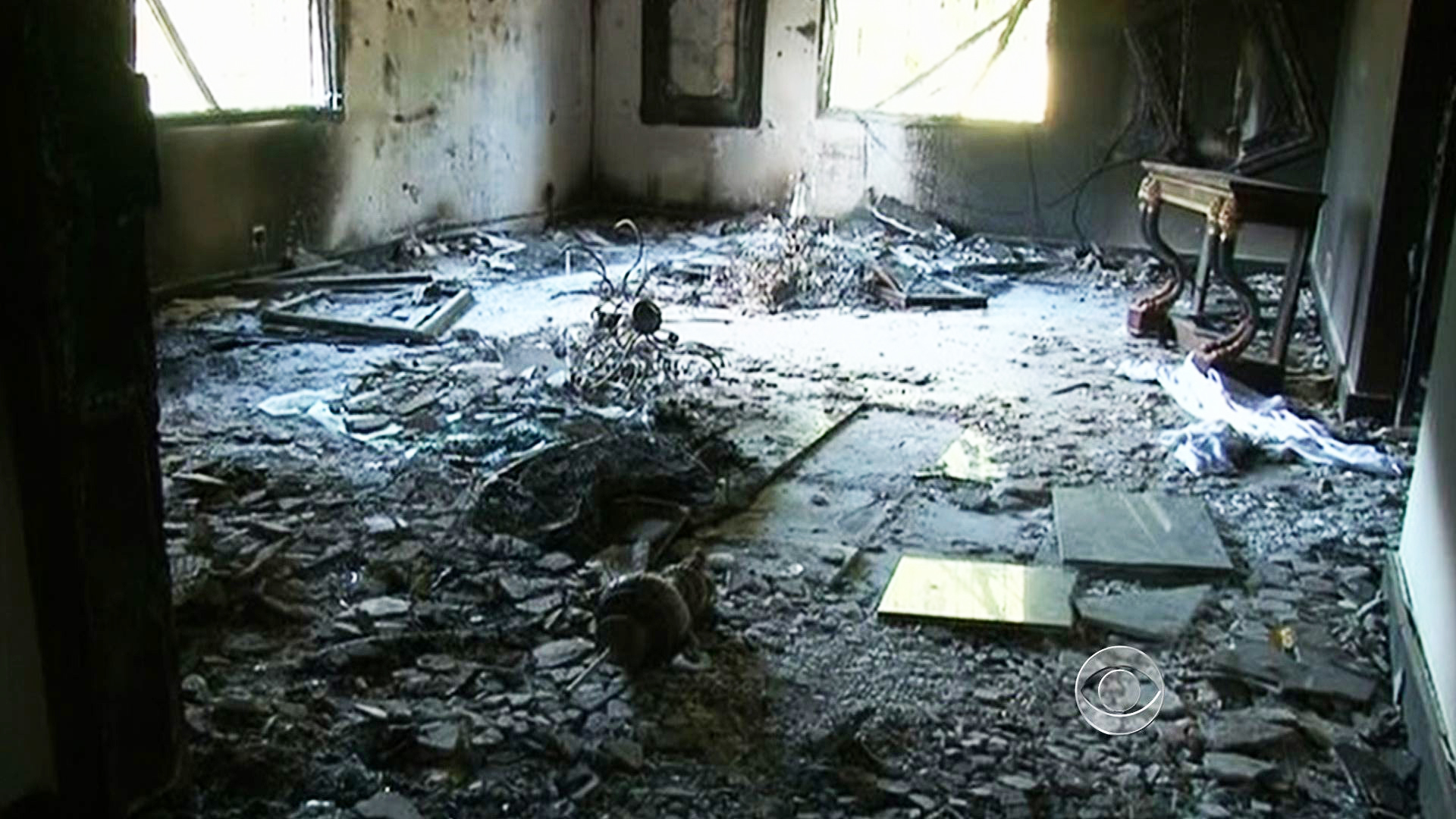 The deputy of slain U.S. Ambassador Christopher Stevens has told congressional investigators that a team of Special Forces prepared to fly from Tripoli to Benghazi during the Sept. 11, 2012 attacks was forbidden from doing so by U.S. Special Operations Command Africa.

The account from Gregory Hicks is in stark contrast to assertions from the Obama administration, which insisted that nobody was ever told to stand down and that all available resources were utilized. Hicks gave private testimony to congressional investigators last month in advance of his upcoming appearance at a congressional hearing Wednesday.

According to excerpts released Monday, Hicks told investigators that SOCAFRICA commander Lt. Col. Gibson and his team were on their way to board a C-130 from Tripoli for Benghazi prior to an attack on a second U.S. compound "when [Col. Gibson] got a phone call from SOCAFRICA which said, 'you can't go now, you don't have the authority to go now.' And so they missed the flight ... They were told not to board the flight, so they missed it."

No assistance arrived from the U.S. military outside of Libya during the hours that Americans were under attack or trapped inside compounds by hostile forces armed with rocket-propelled grenades, mortars and AK-47 rifles.

Hicks told congressional investigators that if the U.S. had quickly sent a military aircraft over Benghazi, it might have saved American lives. The U.S. Souda Bay Naval Base is an hour's flight from Libya.

Obama administration officials have insisted that no military resources could have made it in time. A White House official told CBS News that, at the start of the attack, Chairman of the Joint Chiefs Martin Dempsey and Defense Secretary Leon Panetta "looked at available options, and the ones we exercised had our military forces arrive in less than 24 hours, well ahead of timelines laid out in established policies."

Hicks is expected to be the first ground-level eyewitness to speak publicly in the nearly eight months since the terrorist attacks that killed Ambassador Stevens and three other Americans. When Stevens went missing, Hicks became the Chief of Mission for the U.S. in Libya.

Ambassador Susan Rice and Secretary of State Hillary Clinton initially indicated the attacks were not planned acts of terror, but an outgrowth of a spontaneous protest over an anti-Islamic YouTube video. Unidentified government officials removed references to terrorism and al Qaeda from so-called "talking points" released to the public shortly after the attacks.

Below are the released excerpts from Hicks' April interview with congressional investigators on the House Oversight Committee.

Q: But do you think, you know, if an F-15, if the military had allowed a jet to go fly over, that it might have prevented [the second attack]?

A: Yeah, and if we had gotten clearance from the Libyan military for an American plane to fly over Libyan airspace. The Libyans that I talked to and the Libyans and other Americans who were involved in the war have told me also that Libyan revolutionaries were very cognizant of the impact that American and NATO airpower had with respect to their victory. They are under no illusions that American and NATO airpower won that war for them. And so, in my personal opinion, a fast-mover flying over Benghazi at some point, you know, as soon as possible might very well have prevented some of the bad things that happened that night.

Q : The theory being, the folks on the ground that are doing these -- committing these terrorist attacks look up, see a heavy duty airplane above, and decide to hightail it?

A: I believe that if -- I believe if we had been able to scramble a fighter or aircraft or two over Benghazi as quickly as possible after the attack commenced, I believe there would not have been a mortar attack on the annex in the morning because I believe the Libyans would have split. They would have been scared to death that we would have gotten a laser on them and killed them.

Q: I just wanted to ask, you mentioned permission from the Libyans. Why is that important? What did you mean by that?

A: Well, it's their country. And for an American military aircraft to fly over their country, we have to have permission from them to do so.

A: We would have certainly wanted to obtain that permission. I believe we would have gotten it if we had asked. I believe that the Libyans were hoping that we were going to come bail them out of this mess. And, you know, they were as surprised as we were that American -- the military forces that did arrive only arrived on the evening of September 12. Yeah.

A: The Defense Attache is there, and he is immediately on the phone to Ministry of Defense and to chief of staff of the Libyan Armed Forces. He also notifies Joint Staff and AFRICOM. Our SOCAFRICA lead, Lieutenant Colonel Gibson, connects with SOCAFRICA in Stuttgart, as well. And, obviously, RAO is also connected back home.

Q: Was there ever any thought at that time of the night to have an F-16, you know, fly over?

A: I called -- when we knew that -- I talked with the Defense Attache, Lt. Col. Keith Phillips, and I asked him, "Is there anything coming?" And he said that the nearest fighter planes were Aviano, that he had been told that it would take two to three hours to get them airborne, but that there were no tanker assets near enough to support a flight from Aviano.

A: And for the second time that night [Before 5:15 AM attack], I asked the Defense Attache, is there anything coming, is there anything out there to help our people from, you know, big military? And the answer, again, was the same as before.

Q: And what was that answer?

Q: So you had mentioned that the first team from Tripoli to Benghazi arrived at 1:15?

Q: And was there a second team that was organized? Could you tell us about the second team?

A: Right. The second team -- the Defense Attache worked assiduously all night long to try to get the Libyan military to respond in some way. Early in the morning -- sorry, after we were formally notified by the Prime Minister, who called me, that Chris had passed, the Libyan military agreed to fly their C-130 to Benghazi and carry additional personnel to Benghazi as reinforcements. Because we at that time -- at that time, the third attack, the mortar attack at 5:15, had not yet occurred, if I remember correctly.

Q: So what time did the second rescue team ??

Q: At that point, you are the Chief of Mission?

Q: Now, did any of the Special Forces folks, were they planning at any time to travel on that second aircraft?

A: On the second, on the C-130? Yes. We fully intended for those guys to go, because we had already essentially stripped ourselves of our security presence, or our security capability to the bare minimum ...

A: So Lieutenant Colonel Gibson, who is the SOCAFRICA commander, his team, you know, they were on their way to the vehicles to go to the airport to get on the C-130 when he got a phone call from SOCAFRICA which said, you can't go now, you don't have authority to go now. And so they missed the flight. And, of course, this meant that one of the ...

Q : They didn't miss the flight. They were told not to board the flight.

A: They were told not to board the flight, so they missed it. So, anyway, and yeah. I still remember Colonel Gibson, he said, "I have never been so embarrassed in my life that a State Department officer has bigger balls than somebody in the military." A nice compliment.

Q: Now, at this point, are you having communications with Washington?

Q: What was the rationale that you were given that they couldn't go, ultimately?

A: I guess they just didn't have the right authority from the right.