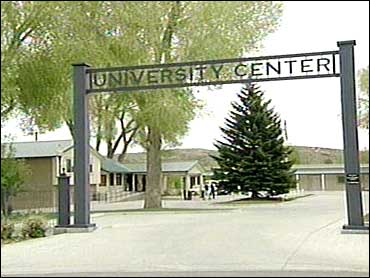 It's an offer that many are finding too good to refuse: get a college diploma without going to class.

Want to be an aerospace engineer, accountant or geologist? Thanks to the Internet, you can buy any degree by logging on and signing up. And just like the spam says, "No books. No tests. No kidding!"

Diploma mills are selling phony degrees as fast as they can print them. They're often nothing more than a Web site and a P.O. box. But Correspondent Vicki Mabrey reports on one diploma mill that claims to have an actual campus.

On the day 60 Minutes Wednesday visited, the campus was empty. There were only two cars in the parking lot, and no sign of faculty or students. We spotted one employee and asked for a campus tour. The employee told us to wait outside, then locked the door and called police.

We left, but not before noticing that Hamilton doesn't look like a typical university. It looks more like an old motel, which is exactly what it was. But that's not mentioned on the university's Web site, which looks very official, complete with a university seal and a list of degree requirements. Hamilton, it says, has grown to be a truly international institution.

"The campus doesn't exist," says Dawn Curtis, who along with Tracy Robirds, once did clerical work for Hamilton University. She says they were two-thirds of the entire staff, and they left after realizing the school wasn't quite as advertised.

"We never saw any faculty advisers at all. We never saw faculty at all, ever," says Curtis. "There aren't any teachers."

When did she start to figure out that Hamilton Campus wasn't a legitimate college? "When I started reading some of the paperwork that started coming back from the students," says Curtis. "And I started seeing that the turnaround between receiving the papers and the graded papers, the promise, and the degrees going out was very fast – pretty much as soon as the checks cleared."

How do you get a degree from Hamilton? You start by filling out a form on a site that claims to be an independent referral service. But it really was set up to funnel business to Hamilton. You'll then be offered dozens of degrees. If you're accepted, and chances are good you will be, it can take as little as a week or two to get a diploma. Your main assignments are to write a short paper and a big check.

Laura Callahan says she thought Hamilton was real, just one of many of legitimate schools that offer courses and degrees through the Internet.

"I wanted to finish college. It was a completely personal goal of mine," says Callahan. "All through my professional career, there was never a job requirement that required me to have an educational degree."

The former Homeland Security executive says she couldn't afford the time or the money for a traditional school, so she checked the Internet for an online university: "Hamilton is advertising themselves as being a four-year school, and even had advanced degrees in computer information systems through their distance learning. Sounded like a good match."

Hamilton's Web site claims the school is accredited, so Callahan says she thought it was a safe bet. She also thought she knew her way around a campus, even if it was a cyber-campus. She'd taken dozens of correspondence and distance learning courses, enough to earn a junior college degree.

All those credits and her "life experience," over 15 years with the government working with computers, qualified her, according to Hamilton, to get her bachelor's and master's degrees. All she needed was to take a 10-question ethics quiz and write a 2,000-word thesis, which amounts to just four pages.

With degrees in hand, Callahan wanted more, and Hamilton was happy to oblige. She wrote a lengthy dissertation and sent another check, and $7,000 later, she was Dr. Laura Callahan, Ph.D.

Did she feel like she was just buying a degree? "I would feel that way if I didn't do the work, if I didn't transfer in all the other prior learning experiences, and if I didn't put in an honest effort into the papers and the work that I did with Hamilton," says Callahan.

Though she didn't know it, Callahan had put her trust in Dr. Rudy Marn. You won't find him on campus. He doesn't live in Wyoming. He runs the school from Key West, Fla., and he doesn't give interviews.

But don't let that empty parking lot fool you. According to documents obtained by 60 Minutes Wednesday, Hamilton is making between $500,000 and $2 million a year – tax-free.

Why is it tax-free? Because of a little church Marn built in the parking lot. Even though it has no pews, and townspeople can't recall ever seeing services here, it qualifies Hamilton as a tax-exempt religious institution.

Robirds and Curtis say thousands have gotten degrees from Hamilton University, including business executives like Jack Pelton, CEO of Cessna Aircraft, – who lists two Hamilton degrees on his resume.

There are also police officers, college professors, and government workers. And then, there's Andrew Michael. He has three degrees from Hamilton, and he was enrolled in a Liberia-based online medical school called St. Luke. He goes on trial in Nevada in November, charged with practicing medicine without a license. If convicted, there's a good chance he could meet some other Hamilton alumni.

"A lot of these prospective students were in prison," says Curtis.

"A lot. And then, the particular degree was forensic psychology, criminology, some sort of justice field. And sent three diplomas to a federal prison," says Robirds. "You need to know how to do that. And then we find out they're on death row. It's like, 'Whoa, where are you going to hang this?'"

And with hundreds of schools like Hamilton, it doesn't take a math major to figure out that online diploma mills are big business -- at least half a billion dollars a year.

How slick are these operations?

"As slick as you want it," says Allen Ezell, who's retired, but used to track diploma mills for the FBI. "It can range from an Internet ad. It can range from spam to a domestic telephone number. You call the number, the registrar calls you back, asks you in 60 seconds, 'What have you done in life? How long you've been in your occupation? Well, I find you qualified.' It's that simple. It took you less than two minutes. He's qualified you for a bachelor's, master's and doctorate."

And Americans are buying degrees as fast as they can be printed, which has become an enormous problem for legitimate colleges and universities. Distance learning is booming, and the Internet is providing college at your convenience.

But as the Web becomes more sophisticated, it's also getting harder to tell the real schools from fakes. And while some people know exactly what they're doing when they buy a degree, John Bear, who's written books on diploma mills, says a lot of others are just being scammed.

"The line that the telemarketers use with the little smirk, in fact, the telemarketing script we have actually says, 'chortle now.' I love that line. When they say, 'Well, of course, you know Harvard Ph.D.s who can hardly tie their shoes and can't program their VCRs -- 'chortle now,'" says Bear.

"So you, with all your experience and your 20 years in business in selling life insurance, or preachin,g or teaching, sure that you know as much as a Harvard Ph.D. So 'chortle again,' we'll give it to you. We'll honor your lifetime experience by giving you the doctorate."

Callahan thought Hamilton was legitimate because it claimed to be fully accredited. But it turns out the accreditation board, like the referral service, was set up by Hamilton, for Hamilton.

How did Callahan get taken in by this? "I think it's just my willingness to believe in people and my naivete," she says.

In a letter sent through his attorney, Marn told 60 Minutes Wednesday that anyone "seeking a non-traditional degree of the type granted by Hamilton University [is] presented with the complete information they need to make an informed decision."

In a way, Curtis agrees: "You gotta know. How can you get a doctorate over the Internet, through an online correspondence course in a month?"

The state of Wyoming wondered, too, and recently changed its education laws. That forced Hamilton to stop selling degrees. Now, the campus is up for sale.

But is it still possible to get a Hamilton-style degree? Of course! Richardson University has a similar Web site, the same academic philosophy, and the same accreditation as Hamilton; only the name and the incorporation have changed.

So long, Wyoming. Hello, Bahamas. Going offshore will make it all but impossible to close Richardson down, and more difficult for Callahan to get back the money she paid, and the job she lost -- even though her job didn't require a college degree. When her bosses found out about her Hamilton diplomas, she was forced to resign.

"I have not knowingly or purposely deceived anyone. And that's something that is very important to me," says Callahan, who says she was very proud of her accomplishments.

When she completed her Ph.D., she was known as Dr. Callahan. Will she let anyone call her doctor now? "No," she says.