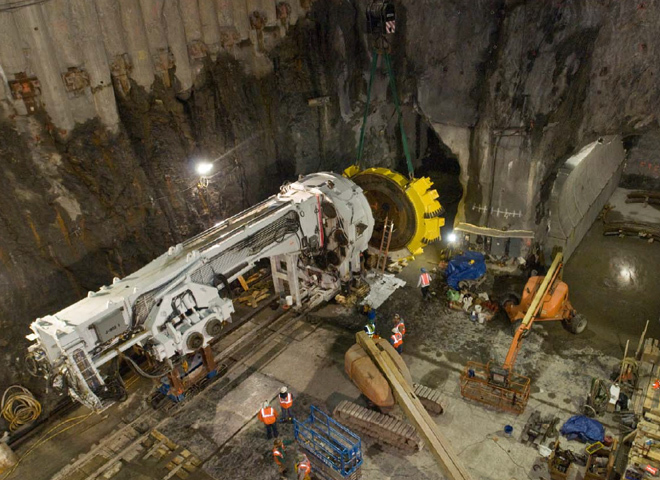 (CBS News) A major project is still under construction . . . and underfoot . . . in one of New York City's most congested neighborhoods. Seth Doane leads us on a tour:

In New York City eyes tend to gaze upward. But these days -- or rather, these years -- there's an equally stunning sight looking down, way down.

Up to 80 feet (or eight stories) below ground, workers are blasting their way through bedrock, building the first new Manhattan subway line in more than 80 years.

What looks like a sprawling underground mine was carved by boring machines as powerful as 12 747s, rumbling beneath the streets of the most populous city in the country.

As you might imagine, some New Yorkers are not amused.

"It's been more or less a war-zone," said Maria Terner.

Construction of this subway line on Manhattan's Upper East Side has unearthed a pile of frustration: complaints about rats, odors, even a so-called "Second Avenue Subway Cough" caused by all the dust.

All in all, says Lynne Cashman, it's not a pretty sight. "All of a sudden, our whole life was turned upside down, topsy-turvy!" she said.

From her balcony overlooking Second Avenue she now gazes onto the above-ground scar from this giant public works project. And, she says, closing her eyes doesn't help.

"Once this came in, we heard generators, blasting, compressors going all night long," Cashman said.

All of this is happening in one of Manhattans most fashionable neighborhoods -- a section of the city that's more "white glove" than "hard hat."

That's certainly changed. Stores have been forced to close their doors, and an area with 100,000 residents per square mile has become a construction zone.

Michael Horodniceanu, chief engineer of this $4.5 billion transportation project, agrees that it's a "pretty difficult" neighborhood in which to work.

"New Yorkers are not easy," he said.

"It'd be different in another city?" Doane asked.

"Absolutely! I think New Yorkers are -- have a sense of entitlement that other people do not have in other parts of the country," Horodniceanu said. "New Yorkers are demanding."

His most challenging role may be that as chief charmer. "That's what people made Zantac for," he laughed. "To take away the heartburn."

Last month, a worker was trapped for hours in quicksand-like mud. Though eventually freed and unharmed, it was yet another delay for this 92-year-old project.

Horodniceanu said the crew's biggest challenge was when blasting, because creating vibrations requires attention to the age and foundations of the buildings above them.

The Second Avenue Subway could, eventually, carry commuters from Spanish Harlem all the way down to the tip of Manhattan along its East Side. But stress that word "eventually" -- because there's only funding for the first leg of the project, about 1.5 miles (or just three stations).

And did we mention it's taken nearly 100 years to get this far?

"This subway line has been a dream, really, for decades and decades. Why did it take so long to get started?" Doane asked.

"I will start by saying one thing: money," Horodniceanu said. "Money, money, money."

The first delay dates back to the Great Depression. Then came wars and economic woes . . . and, of course, there's the sheer complexity of the project.

Civil engineer and professor Robert Paaswell at New York's City College said this subway project is as impressive an engineering feat as the Empire State Building - and it's vital.

In fact, the United States spends just 1.7 percent of its GDP on transportation infrastructure, compared to Canada's four percent, or China's nine percent.

Back beneath the street, workers -- they're called "sand hogs" -- are at it 24 hours a day. Some of them followed their fathers into this line of work, including Austin Brady, who's worked underground for 45 years.

"Is there something special about working beneath a big city as opposed to in an unpopulated place?" Doane asked.

"Sure. You get to go to all the nice neighborhoods and they never know you're there!" Brady laughed.

Well, except for the explosions.

Still, Michael Horodniceanu promises all this work is well worth the pain: "For better or worse, when we started this project, we married these people. So we have to make the marriage work."

And like any marriage, sometimes you just have to be patient.

And there's light at the end of the tunnel: In three years, the first leg of the subway line will be completed.