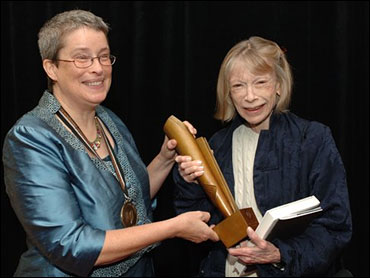 On a night when honorary winner Norman Mailer likened the literary novel to the horse and buggy, National Book Award judges helped canonize what is sure to become a classic of nonfiction: Joan Didion's "The Year of Magical Thinking."

Didion's memoir about the death of her husband, author John Gregory Dunne, brought the 70-year-old writer her first National Book Award in her 40-year career and continued a wave of virtually nonstop praise since the book came out a month ago.

"There's hardly anything I can say about this except thank you," Didion said Wednesday night, praising her publisher, Alfred A. Knopf, for supporting her as she wrote her painfully personal best seller.

Didion has long been idolized by writers for her precise, incisive fiction and literary journalism. But "The Year of Magical Thinking" brought her a large readership, too, with booksellers saying that her memoir has been especially in demand from those who lost a loved one or knew someone who had.

Few were surprised by Didion's victory. Few were not surprised by the announcement for fiction: William T. Vollmann, cited for "Europe Central," an 800-page novel, complete with footnotes, about Germany and the Soviet Union during World War II.

E.L. Doctorow's "The March" and Mary Gaitskill's "Veronica" had been regarded as the leading contenders.

"I thought I would lose, so I didn't prepare a speech," said Vollmann, 46, who then turned serious as he said his book was inspired by a film he saw in elementary school "about burned corpses being pulled out of ovens."

Vollmann noted he was part German and wondered what he would have done had he lived under the Nazis.

"I'm very happy it's over," he said of his book, "and that I don't have to think about it anymore."

A couple of hours before Vollman's victory, the 82-year-old Mailer - slowed by heart surgery and bad knees - was helped to the stage and in a strong voice declared that technology was outwitting the literary novelist and that serious writers were like carriage makers "before the onrush of the automobile."

Vollmann, whose Web site refers to him, perhaps in jest, as a "future winner of the Nobel Prize for literature," is a bit of a machine himself. He is a prolific writer with a history of going long, his many books including a seven-volume, 3,000-page work on violence.

But he didn't disagree with Mailer's point, saying after the ceremony that "the book is probably going to become an irrelevant object," and adding, "I'm just going to stick it out as long as I can."

"It makes me happy to try to do something beautiful. The world doesn't owe me a living," he said.

It was a night for first-time winners, though some waited far longer than others. W.S. Merwin, 78 years old and a published poet since the 1950s, finally won in poetry for "Migration." The winner of the young people's literature award, Jeanne Birdsall, pulled it off with her debut book. Her novel, "The Penderwicks," tells of four sisters and their widowed father.

Birdsall, 54, quoted from a letter from a young fan named Scott: "This book is about being a good listener, even if you're a grown-up." She had tried writing a novel for adults in her early 40s, said it nearly ruined her marriage, then took a shot at a children's book three years ago.

"My husband is floating on air," she said after the ceremony.

Mailer was given the Medal for Distinguished Contribution to American Letters and Ferlinghetti was presented with the Literarian Award for Outstanding Service to the American Literary Community.

The awards, now in their 56th year, are sponsored by the National Book Foundation, a nonprofit organization that uses money raised by the ceremony to fund its educational programs.