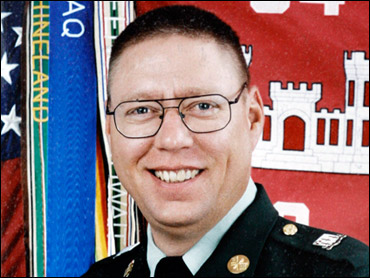 A soldier in accused shooter Army Sgt. John Russell's unit says Russell was angry because he thought he was suffering from combat stress.

But he told his fellow troopers that the doctors at the clinic he allegedly attacked did not believe him, reports CBS News correspondent Kimberly Dozier at the Pentagon.

The 44-year-old signals specialist from the 54th Engineering Battalion, based in Bamberg, Germany, was charged with five counts of murder and one count of aggravated assault for Monday's shooting, which killed two military doctors and three soldiers, at a combat stress clinic at Camp Liberty, in Iraq.

Russell had been relieved of his weapon a week earlier, after making some "inappropriate remarks," his fellow soldier said, and he'd been referred to the stress clinic for counseling. But each day, the counselors "sent him back to his base," where Russell complained the doctors were refusing to take his symptoms seriously or give him the medication he thought he needed.

On Monday, the soldier says Russell was being transported back and forth to the mental health clinic by his staff sergeant escort.

After yet another argument at the clinic, he and his escort had just returned to Russell's brigade headquarters. That's when he "assaulted his escort, stole his weapon," and held him at briefly at gunpoint. Russell snatched away the keys for the vehicle, and drove back to the treatment center, where he allegedly opened fire.

The overpowered escort rushed inside to alert his command, and the battalion's physician's assistant immediately called over to the clinic, but it was too late. The call went through "just in time to hear the gun shots."

These "stress clinics" were supposed to be part of the answer, with hundreds of thousands of troops reporting symptoms of post traumatic stress, and the more severe post-traumatic stress disorder.

Symptoms of PTSD vary, but can include sleeplessness, nightmares, hyper vigilance, depression, and in some of the rarer cases, violent behavior. An army study last year showed troops on a third or fourth deployment are twice as likely to develop PTSD.

Adm. Mike Mullen, chairman of the Joint Chiefs of Staff told Congress today that the shooting shows clearly that more needs to be done.

"The stress of multiple deployments, and the institutional pressure real or imagined, is driving some people to either leave the service or take their own lives," Mullen said. "It can also drive them to hurt others as this week's tragic shooting in Baghdad appears to have confirmed.

Medical health professionals within the military tell CBS News they've sometimes faced an uphill fight convincing some more "traditionally minded" military commanders that help is needed. Admiral Mullen and his staff have proved allies in changing minds, they say, but that progress had still been painfully slow.

One equated the problem to 2002 and 2003 in Iraq, when the Pentagon's top brass finally came around to the idea that troops in Iraq needed armored vehicles - but that meant funding them, building them, and shipping them out. The same process is underway trying to set up a mental health system within the military, but they literally can't hire psychologists and psychiatrists fast enough.

The troops in Russell's unit had been counseled recently to look out for symptoms that could lead to suicide. But the soldier says "no one had been warned to watch for something like this." It's left his troops bewildered, trying understand why a man "with a wife and kids waiting for him back in Germany," would do this, the soldier said.

The staff sergeant Russell overpowered is struggling to cope with the knowledge that his gun was used to murder five fellow troops, the soldier added. And for the entire battalion, this has blackened what had seemed to them to be a winning year in Iraq.