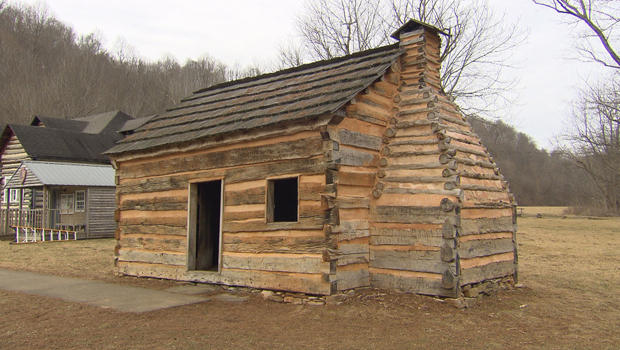 Visitors to a small log cabin in Kentucky are right to ask: Is it true that Abraham Lincoln slept here? On the eve of Lincoln's 209th birthday tomorrow, Brook Silva-Braga has the answer:

Professor Henri Grissino-Mayer has come to Hodgenville, Kentucky to solve a mystery almost as old as Abraham Lincoln himself.

Silva-Braga asked, "So, someone pulls off the highway, sees you guys drilling into this cabin and says, 'What are you doing here?' what do you say to them?"

"What we're trying to do is authenticate when this cabin was made by using the tree rings in the logs," he replied.

Some say our 16th president, born in these hills in 1809, spent some of his childhood in this cabin at Knob Creek.

Examining the cabin's logs, Grissino-Mayer said, "This one has a really nice outer curved surface down here. That's going to give us the outermost tree ring that was ever formed. And therefore, it'll give us the cutting date of this particular log."

The professor and his team from the University of Tennessee have used this technique to date all sorts of old things, including, back in 2004, another Lincoln cabin just down the road … the one he was actually born in.

"I think at one point there is even a plaque that said, "This might be the Lincoln cabin' -- we just didn't know," said Ranger Natalie Barber, at the Abraham Lincoln Birthplace National Historic Park.

What we do know is that Honest Abe was born there -- now a park bearing his name. But Ranger Barber says no one honestly knows what happened to the Lincoln cabin. "There was no cabin here; It was likely gone by the end of the Civil War," she said. "But about a mile up the road was a different farm, the Davenport farm. And there was a cabin on it, and the story was the cabin had originally sat here, but was moved to that farm."

"That those were the people that grabbed the logs and moved them down the road?" asked Silva-Braga.

"That's it, and that's a story you can sell. And so that's the story that they sold."

Which explains the genesis of a bizarre 1890s tour that paired Lincoln's cabin with the cabin of another Kentucky native son, Jefferson Davis, president of the Confederacy -- and brought the cabins of this unlikely duo to towns and cities across America.

After which, all the logs wound up in storage, until a group of private citizens decided to put the cabin back together at Lincoln's birthplace.

And how did they know which logs were which? "They didn't. They had no idea!" laughed Ranger Barber.

"So they just kinda threw 'em together -- a few Davis logs, a few Lincoln logs. If they fit together, why not?"

"If you got a traditional cabin, there you go!"

Wherever they came from, when Professor Grissino-Mayer dated the logs used to build the cabin, he discovered they'd been cut when Lincoln was already in Congress.

Some visitors, like Levan Martin, leave disappointed. "I feel kind of cheated," he told Silva-Braga.

Why is that? "'Cause it's not the real thing!" he laughed.

But Lincoln's importance to Hodgenville is the real thing

Besides, they still have the story of the other cabin, the one back at Knob Creek. It actually belonged to a childhood friend of the president's -- so surely Lincoln would have spent time here.

Time to put the story to the test, by taking samples from the wood.

Back in the lab, the researchers sand the wood to reveal its surface, then precisely measure the pattern of wide and narrow rings, and try to match it to trees with established dates.

"That pattern is unique, just like a fingerprint, just like a DNA match," said Grissino-Mayer. "And we have a saying, 'Trees don't know how to lie.'"

"The trees don't lie, but they seem to often reveal that people have been lying," Silva-Braga said.

"People like things to be old. It's not so much that they're lying; it's just that sometimes history gets it wrong."

Having entered all the data into a computer program, the researchers asked the truthful trees what year they'd been cut down.

"Oh, no; he was already president!" said Silva-Braga.

"That's right. Unfortunately, this cabin has nothing to do with Abraham Lincoln," said Grissino-Mayer.

So no, Abraham Lincoln did not sleep here in the Knob Creek cabin … or in the "symbolic cabin" at his birthplace.

"People aren't turning off the Interstate and coming here to experience Hodgenville because of the cabin," she said. "They're here because of Lincoln -- who he was as a person, not the wood that surrounded him.

"It's the story and the man that's always going to drive people here."