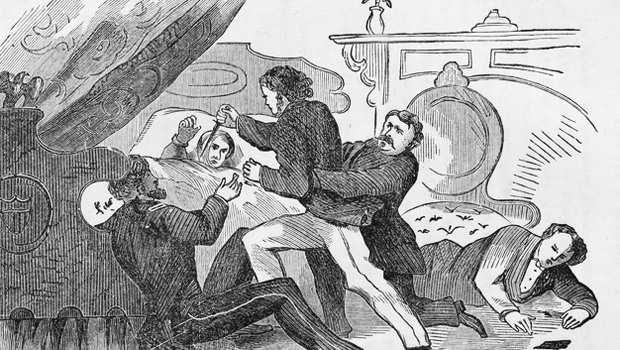 Overshadowed by the mortal attack on President Abraham Lincoln on April 14, 1865, was another assassination attempt by the same band of conspirators. Unlike John Wilkes Booth, the Secretary of State's assailant would prove much less effective.

But not for lack of trying. In his attempt to murder Secretary William Seward, Lewis Powell would inflict serious injuries on eight people, including four of Seward's children, a bodyguard, and a messenger.

Born in Alabama, Powell (also known as Lewis Payne), grew up in Georgia and Florida. In May 1861 he left home, at age 17, to become a soldier. He fought in the Battle of Fredericksburg, and was wounded and captured at Gettysburg. Escaping from a military hospital, Powell joined up with Mosby's Rangers.

In January 1865, under circumstances still debated by historians, Powell deserted and made his way to Alexandria, Va., where he claimed to be a civilian refugee. In Maryland he took up with a group led by Booth, who was corralling conspirators in a plot to kidnap President Lincoln and ferry him across the Potomac into Confederate territory. The plot never materialized, and after being detained for beating a black maid, Powell made his way to Washington.

With the war over, in April Booth's plot turned to murder. On the night of the shooting of President Lincoln at Ford's Theatre, according to an account in the New York Herald, "a tall, well-dressed man" appeared at the residence of Secretary Seward at about half-past-ten, claiming to bear medicine prescribed for Seward by his doctor. (Seward was convalescing from a carriage accident nine days previous.)

When a servant refused admission, Powell pushed his way past and rushed up to the third floor, where he encountered Frederick Seward (William's son, and the Assistant Secretary of State). Powell tried to shoot him, but when his gun misfired he struck Frederick with it, fracturing his skull. Powell also stabbed another son, Augustus Seward, before rushing into Secretary Seward's room.

Powell proceeded to attack Seward's bodyguard, Sergeant George Robinson, and a male nurse (who was stabbed though the lungs), as well as Seward's daughter, Fanny.

Powell set upon Seward with a dagger, striking him in the neck and the breast. When the Secretary's eldest son, Major William Seward, Jr., rushed into the room to defend his father, he was stabbed in the side.

Fleeing the bloody scene, Powell then dashed downstairs, and as he made his escape he stabbed a State Department messenger, Emerick Hansell, in the back. Powell mounted his horse and rode off.

Fortunately for Secretary Seward, the splint he wore around his broken jaw protected his arteries from the knife blade. He recovered from his wounds, as did the other six people who were stabbed. Frederick also recovered from his head injury, though he was in a coma for two months.

Because his fellow-conspirator David Herold had fled the scene in a panic, Powell was alone and lost in the streets of Washington. He was eventually captured, wearing blood-stained clothing, upon his arrival at the home of Mary Surratt, who was being questioned for her role in the conspiracy.

Booth was cornered in a barn in Virginia and killed, while the other conspirators were tried. Powell reportedly attempted to kill himself by banging his head against his cell wall. His defense attorney argued not that Powell hadn't participated in the attempt on Seward's life, but that he was a fanatic who might be insane. He also argued that, since Seward hadn't actually died, Powell's life should be spared, despite his participation in the conspiracy that murdered the president.

Four people -- Powell, Herold, George Atzerodt (who had been assigned to assassinate Vice President Andrew Johnson) and Surratt -- were hanged as co-conspirators on July 7, 1865. Three others were sentenced to life in prison, and an eighth was sentenced to six years.