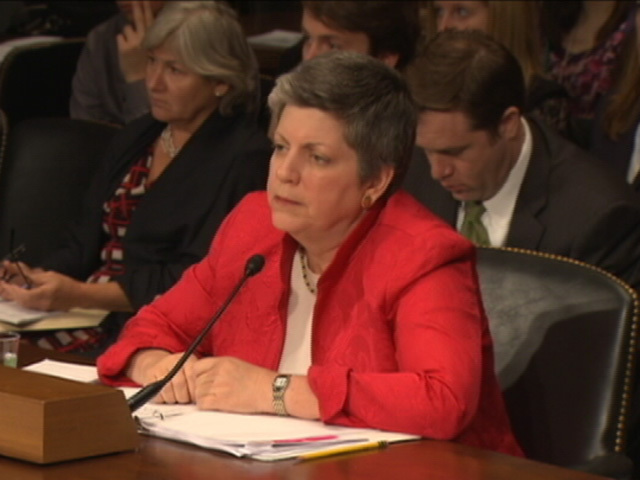 In that operation, the Bureau of Alcohol, Tobacco, Firearms and Explosives allegedly intentionally allowed vast numbers of assault weapons to fall into the hands of Mexico's drug cartels. Insiders call it letting guns "walk."

Sources say the idea was apparently to see where the guns ended up in hopes of somehow taking down a major cartel. But numerous law enforcement officials say the practice of letting guns walk is normally strictly forbidden, because while investigators are waiting to see where they end up, they can be used in violent crimes.

Sources tell CBS News and documents indicate that an agent from U.S. Immigrations and Customs Enforcement (ICE) was working in the ATF group tasked to Fast and Furious. The Department of Homeland Security oversees ICE. Today, Senator Charles Grassley (R-Iowa) asked Napolitano about that at a hearing before the Judiciary Committee.

Gunrunning scandal at the ATF

"I'm not aware of that particular agent," answered Napolitano. She also said that she's become aware of ATF's Fast and Furious operation "in the wake of the murders of Terry and Zapato."

"Did you sign off on this operation, and if so, when?" Grassley asked.

"No," said Napolitano, "this is within the Justice Department."

Border Patrol Agent Brian Terry and Immigration Agent Jaime Zapata were gunned down in separate incidents involving suspected Mexican drug cartel members. Two AK-47 assault-type variant rifles that ATF had recorded as having let "walk" nearly a year before were found at the murder scene of Terry. The details of the origin of the weapon used in Zapata's murder are not clear.

When asked, Napolitano told Grassley that nobody has expressed concerns with her about ATF purposely allowing gun traffickers to purchase weapons to transport to Mexican drug cartels. She also told Grassley she's never discussed such a strategy in general with anyone.

"I was not so informed," Napolitano said.

On a related topic, Grassley asked Napolitano if it was true that two members of the border tactical team that Brian Terry was on were carrying only beanbag guns and no regular weapons.

"I don't know if that's true," answered Napolitano, noting the matter is under investigation.

Grassley also wanted to know if Terry's team was under standing orders to use non-lethal force even against bandits clearly armed with assault rifles.

"I have asked that question, and my information is absolutely not," Napolitano said. She described a policy that allows agents to choose lethal or non-lethal force depending on the threat. "Our lethal force policy is the same as every other law enforcement agency in the country. If you are in serious threat of death or injury you are authorized to use lethal force."

According to press reports, legislators from all three major parties in Mexico in congress there are calling for a U.S.-Mexico working group "to examine accusations that U.S. federal agents allowed hundreds of guns to flow into Mexico." The reports quote Congressman Humberto Trevino as estimating that 150 shooting injuries or deaths have been linked to walked guns.