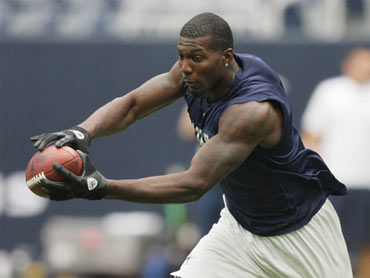 Maybe Dez Bryant should have carried those pads after all.

Two months after refusing a rookie initiation ritual of carrying teammate Roy Williams' shoulder pads during training camp, the Cowboys player was stuck shouldering a $54,000 dinner bill courtesy of his teammates, according to ESPN's Calvin Watkins.

According to Watkins, after Bryant refused to carry the pads in July, Williams shrugged off the snub and casually suggested an alternative: just take him out to dinner. Bryant agreed.

But what the rookie didn't know was that Williams decided to invite not just a few guys but the entire defensive team.

According to Watkins, the players ordered everything off the menu and took bottles of wine home with them.

Said Bryant's adviser David Wells: "They got the young fella. What could he say? He had to pay it unless he wanted to wash dishes for a month."