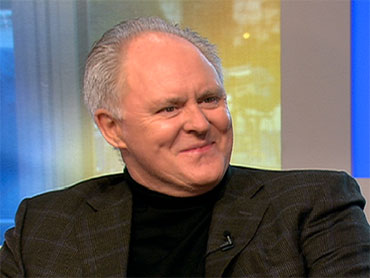 The Showtime drama "Dexter" is having its best year ever, with record numbers of viewers watching the show in recent weeks. That success could be the result an addition to the show's cast: John Lithgow.

Lithgow stars as Arthur Mitchell, a violent serial murderer responsible for the deaths of 60 people.

"I'm terrified of myself," Lithgow said on "The Early Show."

Photos: Best Smiles on TV
TV to Fall For

Lithgow's career has included roles ranging from aliens to presidents, but a serial killer was a new route for the actor. However, Lithgow said when he was approached for the role by Clyde Phillips, the executive producer of "Dexter," he was on the edge of his seat during the entire pitch.

"If you followed ("Dexter") this fall, it's an incredible story, and it was a hair-raising story -- even that morning. So that's what sold me."

After accepting the role, Lithgow said he watched the previous 36 episodes and became a "complete addict" of the critically-acclaimed show.

The character of Dexter, played by Michael C. Hall, is a medical examiner in a big police department; he is a serial killer, but only a serial killer for the good.

Lithgow disagreed, saying, "My character is even more -- far more -- appalling than Dexter. I mean, in a way, I've done Michael C. Hall a great service. I've made him look like the ultimate good guy."

But how did Lithgow make the transition into this disturbed character?

"The writers have given me a gift," he said. "I mean, he's an amazing character. The extraordinary thing about this 'Trinity killer,' he's a killer who is appalled; he hates what he does. He is in agony. He's a tortured soul. And so I think it's a matter of just finding somewhere in there, something to sympathize with."

Lithgow, who is known for his comedy work in the sitcom "Third Rock from the Sun" and his children's books, said people have embraced his creepy character.

"They are so enthusiastic. They seem to have a taste for horror," he said. "They sort of lick their chops at 'Dexter.' They're thrilled. I would have thought that people would run from me in terror."

So what's in store for the season finale of "Dexter"?

Lithgow said all he could reveal is the title of the final episode: "Getaway."