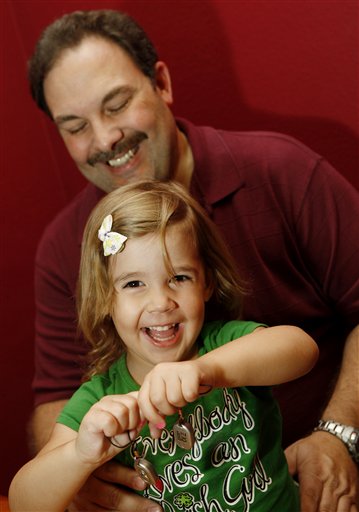 With a computer or cell phone and an electronic tracking device, you can locate a missing pet, follow the path of a stolen car, find a skier buried in an avalanche and rescue a hiker lost in the woods.

So what about a child snatched by a stranger?

About 800,000 children are reported missing in the U.S. each year. The vast majority are runaways, followed by parental abductions, said Ernie Allen, president of the National Center for Missing and Exploited Children. About 58,000 children are kidnapped by strangers, and 99 percent of those come home fairly quickly, often victims of sexual abuse.

Then there are the approximately 115 children a year like Jaycee Dugard, who are snatched then murdered, ransomed or kept for several years.

Ever since Dugard's recovery in August after nearly two decades of allegedly being held in a Northern California backyard, parents and others have written on blogs and commented online to articles about ways to protect kids.

There are technological tools that give parents some peace of mind, from clip-on alarms to GPS locators that can be dropped in a backpack or stuffed in a teddy bear, but experts caution that the gadgets are not without their limitations and can even raise safety concerns of their own.

"Tracking devices can be useful to parents," said Allen. "Our concern is that they will be viewed as more than they are."

Myths about successful child-tracking items include implantable GPS-enabled microchips, but industry experts say they do not exist on the market. And there are concerns, such as whether electronically tethering children makes them anxious for their safety or makes parents lazy.

Companies that sell locators say they do not substitute keeping an eye on your kids and they do not prevent kidnappings or guarantee recovery after an abduction.

"This is not tag and release," said Todd Morris, CEO of BrickHouse Security, which makes the BrickHouse Child Locator and distributes many other brands. "But even the best parent, with the best intentions, can find it hard to keep track of their kids all the time."

The BrickHouse unit is among a number of gadgets that beep, vibrate or light up to help guide a parent toward a missing child. These gadgets are in two parts, with the main device held by the parent and a small alarm attached to the child, usually on a piece of clothing.

When a child is out of sight, the parent presses his device to activate the child's alarm. The gadgets usually work up to about 200 yards.

Some of these devices have monitors allowing parents to set parameters for how far their children can roam before an alarm goes off. Others have panic buttons the child can press if he feels in danger. Few have GPS technology.

On a recent vacation to SeaWorld, Joe Nesbitt, a computer technician in Las Vegas, turned around after tending to one of his children to find another gone.

"She was out in the open park. I was terrified," he said.

Nesbitt had clipped a BrickHouse Child Locator tag to his 2-year-old daughter's shoe, and when he activated it, arrows on his device led him to within inches of the girl, who disappeared after crawling through a tunnel in a children's play area.

Nesbitt said he went through the tunnel to find her, but she had climbed up some netting out of sight.

"If I hadn't had the tracker, I would've really, really freaked out," he said.

Nesbitt said he bought the locator for around $200 after seeing it on a TV commercial.

Other gadgets on the market use GPS technology, which rely on satellite signals, that allow parents using a Web browser to monitor the location of an enabled device, often a cell phone, within 50-100 yards. BrickHouse, AmberAlert GPS and Zoombak all sell GPS trackers that are smaller than a deck of cards. Wireless carriers also offer locator services that hook up family cell phones.

But even the manufacturers re quick to recognize the limitations of their devices. Batteries only last so long, prices can reach hundreds of dollars, weather can interfere with GPS signals and some devices may be tricky to use.

"What you see on the market is that there are various products at every level," said Barry Wallace, chief executive of Intelent Technologies, Inc., which makes the Giggle Bug, a $20 clip-on alarm that looks like a ladybug. "But what people don't understand is it is not one-size-fits-all."

A concern with some locators that are attached to a child or sewn into his clothing is danger to the child should an abductor try to pull it off.

"We also don't want children's first reaction to kidnapping situations be, 'How do I activate this thing?' That's valuable seconds not trying to get away," Allen said.

Though the trackers are not illegal, some parents are concerned about what effects these surveillance devices could have on a child's sense of independence or level of paranoia.

"I think my concern would be more the perceived lack of trust ... if you're telling them you can't regulate yourself to make safe decisions of where you're going," said Stuart Lustig, a professor of child psychiatry at the University of California, San Francisco.

But he said some parents who take comfort in the tool could project an air of calm on the child.

Nesbitt said the device makes him feel like he is making an extra effort to keep his children safe.