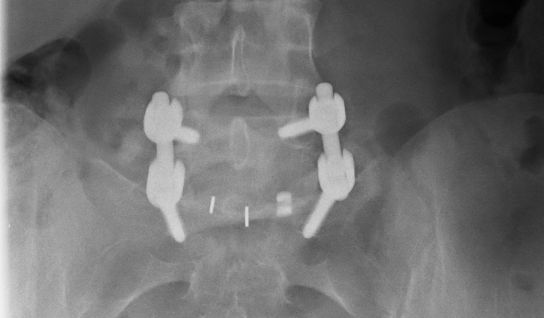 Spinal fusion is one of the most common surgeries in America, with more performed than even hip replacements. For medical device companies, it is also one of the most profitable. The procedure joins adjacent vertebrae, often with metal rods and screws. A spinal implant maker can earn tens of thousands of dollars from a single fusion.

Many of these companies also pay surgeons to promote and develop new products. Those involved say the arrangements fuel innovation. Medical ethicists contend that they can also create conflicts of interest and influence a doctor to use a certain company's products.

Data obtained by CBS News identifies the surgeons that performed the most spinal fusions on four or more vertebrae on Medicare patients from 2011-2012. Fusions on large portions of the spine tend to require more hardware.

CBS News cross-referenced this information with financial disclosure records and legal depositions and found that some of these same doctors received hundreds of thousands of dollars from spinal implant makers. The money was for helping to promote and develop new products, according to the surgeons and device companies involved.

The Medicare data shows Dr. W. Blake Rodgers of Jefferson City, Missouri performed 110 fusions on four or more vertebrae from 2011-2012 - the second most in the country (see how the data was compiled below). He has also appeared in promotional materials for NuVasive, a maker of spinal implants.

NuVasive does not disclose payments to physicians and would not return repeated emails or phone calls for comment. But in a recent legal deposition Dr. Rodgers recalled receiving more than $600,000 from the company in 2011. He said the payments were for consulting, teaching, and helping design dozens of device systems.

Dr. Rodgers would not agree to an interview for this story. His attorney said he is "focused, as always, on helping his patients."

The Medicare database indicates Dr. Kade Huntsman of Salt Lake City, Utah performed 107 fusions on four or more vertebrae, the third most in the country. He performed them on 17% of patients he saw, almost the highest rate nationwide.

At a conference in 2011, Dr. Huntsman disclosed receiving between $126,000 and $560,000 for royalties, consulting, and speaking from NuVasive. His resume states that he has advised at least two other companies.

Dr. Huntsman also would not agree to an interview but his attorney provided a statement.

His attorney added that Dr. Huntsman's patients sign a disclosure form that informs them of his financial relationship with NuVasive. The form does not state how much money he was paid by the company, but his attorney said the "patient certainly can ask questions if they desire to know more."

Last year in a regulatory filing, NuVasive revealed that it was being investigated by the U.S. Department of Health and Human Services (HHS) for possible false claims submitted to Medicare and Medicaid. No other details of the probe have been made public, including whether any doctors are under investigation.

The data also indicates Dr. Richard Hynes of Melbourne, Florida performed 107 fusions on four or more vertebrae - tied for the third most in the country. Medtronic, another spinal implant maker, paid Dr. Hynes and his LLC $767,000 over just the twelve months ending in June of 2013. The money was for helping to design new products, training, and other services, Medtronic's website says.

Medtronic began disclosing payments to doctors after coming under scrutiny from U.S. Senator Charles Grassley. Two separate whistleblower lawsuits filed by former employees had alleged that the company paid surgeons sham consulting and royalty fees for implanting its devices. In 2006, the company settled one of the suits for $40 million, while denying wrongdoing. The other suit was dismissed.

Dr. Hynes would not agree to an interview or provide a statement, but Medtronic insisted that its consulting and royalty arrangements are vital to innovation and advancing patient care. The company added that surgeons are not paid royalties for devices they implant during their own surgeries to avoid conflicts of interest.

"Our current agreements contain required disclosures by our consultants to ensure transparency," a spokesman wrote, "and we have a rigorous process to ensure our consulting relationships are proper."

Medical device companies are not yet required by law to disclose financial relationships with doctors, but later this year, all payments larger than $10 will be made public under the Physician Payment Sunshine Act. The first release of that information is expected in September, and it will cover the period of August to December 2013.

Dr. Charles Burton, President of the Association for Medical Ethics, has been an outspoken supporter of the law. "In my opinion, the importance of the Physician Sunshine Act will be its continuing role as a visible reminder to physicians that the patient's best interests should always come first," he said.

How the Medicare data was compiled

We asked Medicare for details on the billing codes for spine surgery and the agency referred us to the American Medical Association, which forwarded us to the North American Spine Society (NASS). One of NASS's billing experts helped us identify the codes most commonly used for spinal fusions that treat degenerative conditions that cause lower back pain. Experts told us to focus on this subset of fusions because it is more controversial, and there is a debate over whether some of them are necessary.

NASS's expert then helped us develop a methodology for counting these surgeries. When fusing more than two vertebrae, there are separate "add-on" codes to be billed once per additional vertebra, according to NASS. Any time CPT code 22585, 22614, 22632, or 22634 was duplicated (billed twice) on the same procedure, it was counted as a fusion on four or more vertebrae.

We did not count surgeries where the physician was described as an assistant or team surgeon, or didn't finish the procedure, by excluding codes with modifiers 53, 55, 66, 73, 74, 80, 81, 82, AK, or AS. Doctors that did not have the specialty codes for neurosurgeons, orthopedic surgeons, or physical rehabilitation specialists were also removed from the dataset.

We sent the instructions to the Centers for Medicare and Medicaid Services (CMS). Michael Marquis, Christopher Powers, and Stephanie Bartee at CMS compiled a large spreadsheet of fusions. No patient information was disclosed, and counts between 1 and 10 were redacted to protect patient privacy. Fusions on beneficiaries in Medicare's Part C program were not included as those plans are run by private insurers.

Limitations to the data