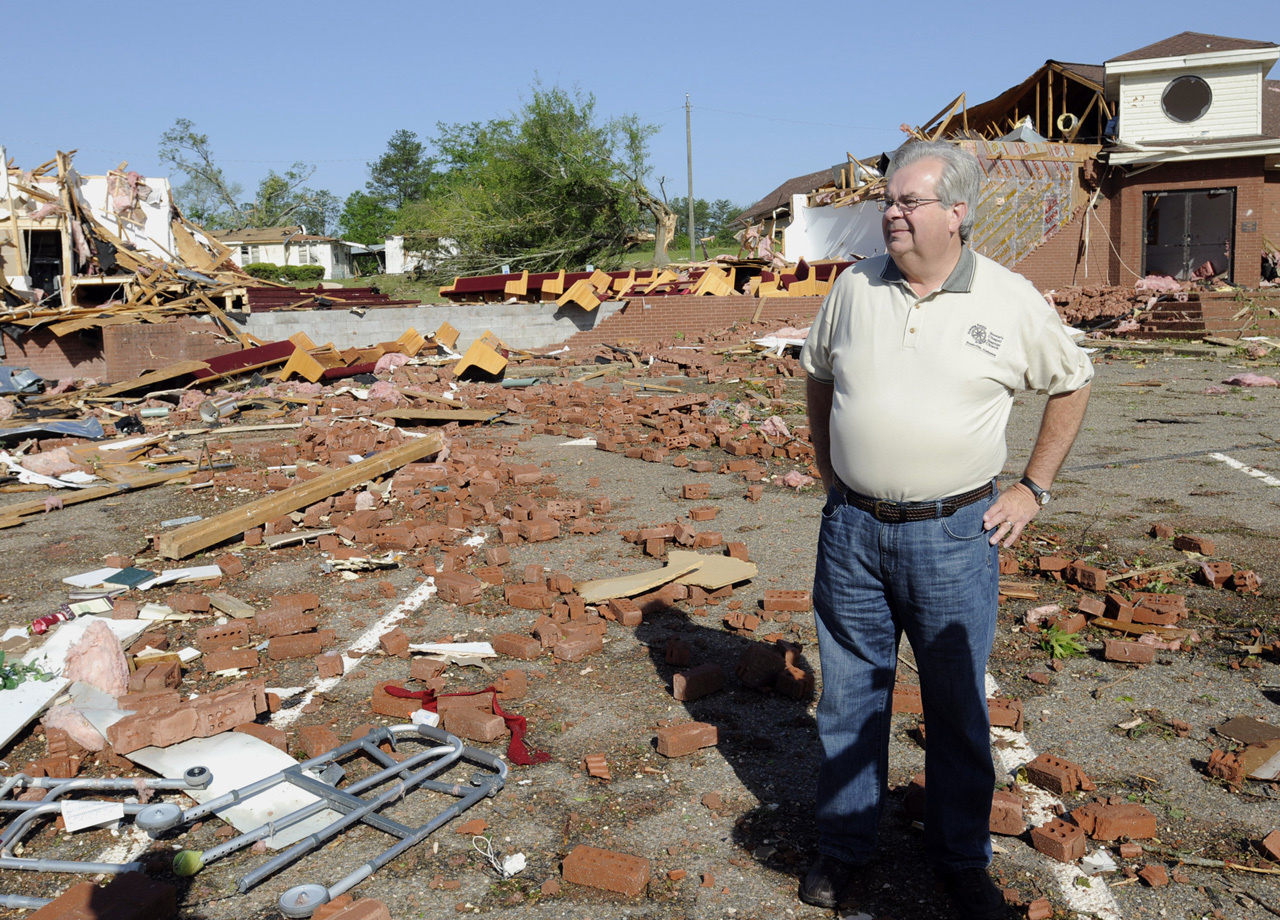 BOONE'S CHAPEL, Ala. - The home Willard Hollon had shared with his son and granddaughters is gone now, as is the one where his daughter lived, both twisted from their foundations by a tornado and tossed into the woods nearby. The storms that devastated the Deep South destroyed his family, too: Willard, his son Steve and daughter Cheryl all were killed when the winds roared through.

The storms that smacked the Midwest and South with howling winds and pounding rain left 17 people dead in four states, including the Hollons. Steve Hollon had recently retired from the Air Force and moved into his father's home with his wife and two daughters while they remodeled a home of their own up the road — he had come to this small community about 25 miles from Montgomery to be closer to his dad.

Henley Hollon lived across the street from his brother Willard and had come outside after the storm passed to make sure everyone was all right. The winds whirled, the lights went out and it all lasted less than a minute, he said. All he saw were a set of wooden steps and flowerbeds, the blooms still on the plants as though nothing happened. An American flag once displayed outside Cheryl's home had been draped over a tree branch about 100 feet away.

"When I shined the light out there I could see it was all gone," Willard Hollon said.

A weather service meteorologist estimated that the tornado's winds reached 140 to 150 mph.

Hymnals still rested on the pews at the nearby Boone's Chapel Baptist Church, even though the walls and roof had blown away. Tammie Silas joined other church members to clean up the debris and came upon two photos of the Hollon family.

"This is all they've got left," Silas said as she clutched the pictures.

A neighbor, retired Alabama Power employee Don Headley, echoed what others in an area accustomed to nasty weather and the threat of tornadoes had said: When the storm bore down on them, they thought the worst had already ended. He had been on his patio and thought he and his wife were in the clear.

"The rain was just in sheets. There was a big bang. It sounded like something was tearing off my roof. Limbs were rolling off the roof," he said.

The noise ended in less than a minute, and Headley went back out on his patio. Where he had been standing moments earlier a two-inch wide limb was now driven through the patio roof, he said.

Autauga County Chief Deputy Sheriff Joe Sedinger said seven others were hurt in the area, including a firefighter injured during rescue operations.

Seven people were hurt in the storm, including a firefighter injured during the emergency response, Sedinger said. He said the storm hopscotched for several miles, leaving some areas devastated and others untouched.

In Alabama's Washington County, about 50 miles north of Mobile, a mother and her two children were among those killed, said county coroner Rickey Davidson. Jean Box, 38, and her two teenage sons, Shelton and Hunter, died when the storm demolished a double-wide mobile home in the Deer Park community, said Washington County Chief Deputy Terry Beasley.

The woman's husband survived and was in the hospital, he said. Winds had thrown things 100 yards from where the home had stood.

"It was not a pretty sight," Davidson said.

Another death was reported in Mississippi's Greene County, said Jeff Rent, a spokesman for the Mississippi Emergency Management Agency. He did not have further details, and the Greene County Sheriff's Office did not immediately return a phone message Saturday.

A state of emergency had been declared for the whole state, and even the first NASCAR race of a busy weekend at Talladega Superspeedway was postponed.

Tornadoes first started touching down Thursday in Oklahoma, where two people were killed before the system pushed into Arkansas and left another seven dead, including three children.

The worst damage in Oklahoma was in the small town of Tushka, where two people were killed and at least 25 hurt as the tornado plowed through the town of 350.

Back in Boone's Chapel, Henley Hollon talked about his family with Gov. Robert Bentley, who visited to comfort victims. The two looked at Hollon family photos that neighbors had pulled from debris scattered over a quarter-mile, as Hollon told Bentley he and his wife didn't have time to get into a hallway when they realized the tornado was hitting.

"If God wanted us, we was in the big room, where He could have got us," Hollon said. "I don't try to outguess God."