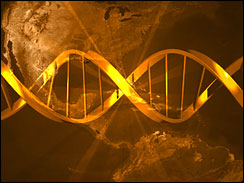 "Just looking at the statistics, there's obviously a correlation between missing people and bodies at the morgue," Sarah Krebs, a Michigan State Police detective, told The Detroit News  for a report Sunday. "If someone is missing someone from Wayne County and they presume they met foul play, we need to have their DNA."

Investigators have sent unidentified remains at the county morgue to the University of North Texas Health Science Center where they're compared to DNA samples. Eight cases were solved that way while another four bodies were identified through fingerprints or dental records, Krebs said.

Four other people considered missing were found alive, including two in jail or prison.

Authorities will take DNA samples again on Dec. 3 at the county medical examiner's office in Detroit, where unidentified bodies remain.

The body of Sandra Lewis, a Detroit mother of five, was found partially buried in March, three months after she disappeared. Her remains were subsequently identified. Her husband, Harold Lewis, wants the killer found.

"It's affecting us because I don't know if I'm walking by this guy every day," he told the newspaper.

DNA solved the disappearance of Donna Hudson, who vanished before a doctor's appointment in June 2012. She had been strangled and left behind a vacant home.

"It's really hitting us still," Hudson's sister, Beatrice Dinwiddie, said. "We're just wondering: My sister was practically helpless. She had been sick a while. She had no strength to fight off anyone. ... Why would someone just take her and kill her?"