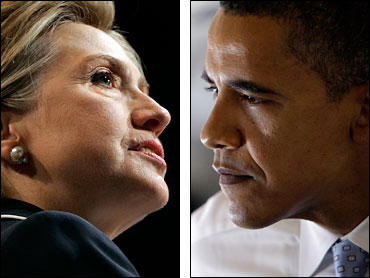 Democrat Hillary Rodham Clinton met rival Barack Obama Obama face-to-face with no one else present, hours before her campaign formally announced she would endorse him Saturday at an event in Washington.

California Sen. Dianne Feinstein said Friday the two Democratic presidential candidates arrived separately at her home for their Thursday night meeting. Feinstein said she took them to her living room, where they sat "in two comfortable chairs facing one another" and then she left the room. No one else was present during the meeting and nothing was served except water.

"There was a desire on both sides, I think, to have private meeting," Feinstein said.

The two candidates emerged laughing from their hour-long meeting.

The California senator had gone upstairs to do her own work when the meeting began at 9 p.m. EDT.

"They called me when it was over," Feinstein said. "I came down and said, `Good night everybody, I hope you had a good meeting.' They were laughing, and that was it."

On Friday, Clinton's campaign said she would deliver her formal endorsement of Obama at a noon gathering at the National Building Museum and urge Democrats to unite behind his candidacy. Obama clinched the nomination Tuesday after primaries in Montana and South Dakota.

Clinton and Obama went to great lengths to keep their meeting a secret from the media beforehand.

After a campaign rally in Bristow, Virginia, the traveling press corps following the Obama campaign was whisked away to Dulles Airport outside of Washington, D.C., to board a flight to Chicago, reports CBS News' Maria Gavrilovic.

According to campaign staffers, Obama had scheduled interviews with local Chicago television reporters and would meet up at the airport shortly, Gavrilovic reports. After waiting for Obama for over an hour, the situation on the plane quickly went from tiresome to alarming once the pilot informed the press that the doors had been locked and the plane was about to take off.

Click here to read Gavrilovic's full account of how the Obama press corps was duped in the "From The Road" blog.

Feinstein, who had supported Clinton throughout the primaries, told reporters the former first lady called her Thursday afternoon and asked for the use of her house.

Obama "was very gracious," Feinstein said. "He said he would go wherever, whenever Sen. Clinton wanted."

"This is a deeply personal time, too, you know," Feinstein said. "Barack is trying to put things together for a major presidential campaign. There are a lot of decompression and nerve endings that need to come together."

One of Clinton's top supporters, fellow New York Sen. Charles Schumer, said Friday that Clinton would agree to be Obama's running mate if he offered the No. 2 spot to her.

"She has said if Sen. Obama should want her to be vice president and thinks it would be best for the ticket, she will serve, she will accept that. But on the other hand, if he chooses someone else she will work just as hard for the party in November," Schumer told ABC's "Good Morning America."

Schumer said the meeting between Clinton and Obama was not about the vice presidency.

His comments came a day after a Clinton spokesman Howard Wolfson denied reports that Clinton was actively campaigning to be on the ticket.

"She is not seeking the vice presidency, and no one speaks for her but her," Wolfson said Thursday. "The choice here is Sen. Obama's and his alone."

Obama is "a once-in-a-generation leader who connects with the hopes and dreams of the American people and will deliver the long-overdue change that our country desperately needs," the Nevada Democrat said in a statement.