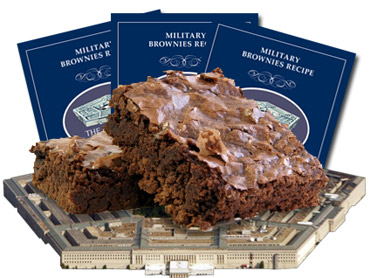 The Pentagon takes dessert almost as seriously as war.

Judging by the 26-page recipe for brownies and cookies published by the Department of Defense, sweet treats can be just as complicated as combat.

The Internet is buzzing with commentary on the government's lengthy, unclassified document, reported by NPR, which details exact instructions for baking brownies and oatmeal cookies for military consumption.

The recipe, or, as it's called in official parlance, the "formula," leaves nothing to chance.

Brownies, it states, must be cut to dimensions not exceeding 3-1/2 inches by 2-1/2 inches by 5/8 inch. The oatmeal cookies, served as rectangles, are similarly restricted.

Even the ingredients are strictly regulated. Walnuts, for example, must be shelled and, "shall be of the small piece size classification, shall be of a light color, and shall be U.S. No. 1 of the U.S. Standards for Shelled English Walnuts." Eggs in frozen or liquid form are permissible, but must conform to "Regulations Governing the Inspection of Eggs and Egg Products."

Jeremy Whitsitt, a Pentagon food specialist, told NPR that the recipe is intended to produce food capable of withstanding the most brutal field conditions.

"What would happen if you cooked a meal, stored it in a stifling hot warehouse, dropped it out of an airplane, dragged it through the mud, left it out with bugs and vermin, and ate it three years later?" Whitsitt asked NPR rhetorically, highlighting the bombproof nature of his brownies.

By Whitsitt's estimation, brownies baked from the lengthy government recipe could last as long as three years.

One Twitter user, "rbbrown," noted they would like to try the Pentagon's recipe, but wasn't willing to put in the work: "I will pay someone to make me Pentagon Brownies."

According to NPR, the 26-page document isn't even the most up to date; it was amended recently to 31 pages and now includes lemon poppy seed cake and chocolate banana nut muffin-tops.