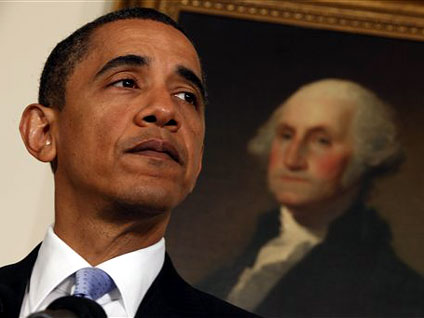 White House officials are spinning the new U.N. Security Council sanctions against Iran as a 1-2-3 punch - the U.N. action, followed by a European Union meeting next week at which they expect the Europeans to come up with additional sanctions for their governments to act on - and finally, new unilateral U.S. sanctions.

But critics have jumped on the latest U.N. action - this is the fourth round of sanctions -- as weak and riddled with loopholes because it had to be watered down to get the support of U.N. Security Council members Russia and China.

President Obama hailed the latest U.N. sanctions as "the toughest ever faced by the Iranian government," and said the vote "demonstrates the growing costs that will come with Iranian intransigence."

Highlights of the new sanctions package include: a ban on the sale of heavy weapons and ballistic missile capabilities to Iran; an asset freeze on additional companies linked to Iran's Revolutionary Guard; a call on nations to block financial transactions if there are grounds to believe they contribute to Iranian nuclear activities; and a committee of experts to monitor compliance with the sanctions.

The financial sanctions, however, are voluntary - and the ultimate sanction, a ban on Iran's oil exports - is off the table because China and Russia would never support it.

But Obama administration officials insist that the U.N.'s latest action represents real progress and will create momentum for further tightening by individual governments. They point to the fact that the Iranians traveled widely to lobby Security Council members and failed. Only Turkey and Brazil, which had brokered an agreement with Iran for a swap of lightly enriched uranium, voted against the measure. Lebanon abstained.

The real question, however, according to Haim Malka, a Senior Fellow with the Center for Strategic and International Studies, is "how tough are these sanctions going to be? How are they actually going to hurt the Iranian regime and change their decision making?"

Malka points out that the sanctions were significantly watered down in order to get the support of Russia and China, and that it will be a challenge to implement them.

Even the White House officials who briefed reporters today admitted that the sanctions themselves are likely to be "insufficient" to stop Iran, but as they see it, the important thing is to follow through and keep up the pressure.