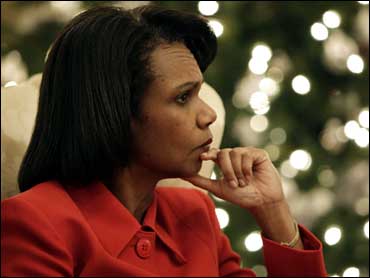 U.S. Secretary of State Condoleezza Rice made an unannounced visit Tuesday to the city that Iraq's Kurds call their Jerusalem, an oil-rich territory claimed by many where the U.S. administration is emphasizing what it sees as new signs of cooperation and progress.

Rice's first stop was to meet with members of a civilian-military reconstruction unit based in Kirkuk and about two dozen provincial politicians of all stripes.

"It is an important province for the future of Iraq, for a democratic Iraq, an Iraq that can be for all people," she said at the start of the meeting with the provincial leaders. She planned to see Iraq's central leadership later Tuesday in Baghdad.

Sunni Arabs ended a yearlong political boycott earlier this month in Kirkuk - the hub of Iraq's northern oil fields - under a deal that sets aside government posts for Arabs. It was the biggest step yet toward unity before a referendum on the area's future.

Rice was highlighting that development, although a separate ethnic group is still boycotting the provincial governing council, and the new role of the United Nations in resolving the future of disputed Kirkuk.