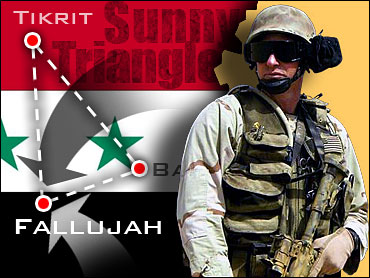 The Pentagon says more than 5,500 servicemen have deserted since the war started in Iraq.

60 Minutes Wednesday found several of these deserters who left the Army or Marine Corps rather than go to Iraq. Like a generation of deserters before them, they fled to Canada.

What do these men, who have violated orders and oaths, have to say for themselves? They told Correspondent Scott Pelley that conscience, not cowardice, made them American deserters.

"I was a warrior. You know? I always have been. I've always felt that way -- that if there are people who can't defend themselves, it's my responsibility to do that," says Pfc. Dan Felushko, 24.

It was Felushko's responsibility to ship out with the Marines to Kuwait in Jan. 2003 to prepare for the invasion of Iraq. Instead, he slipped out of Camp Pendleton, Calif., and deployed himself to Canada.

"I didn't want, you know, 'Died deluded in Iraq' over my gravestone," says Felushko. "If I'd gone, personally, because of the things that I believed, it would have felt wrong. Because I saw it as wrong, if I died there or killed somebody there, that would have been more wrong."

He told Pelley it wasn't fighting that bothered him. In fact, he says he started basic training just weeks after al Qaeda attacked New York and Washington –- and he was prepared to get even for Sept. 11 in Afghanistan.

But Felushko says he didn't see a connection between the attack on America and Saddam Hussein.

But Felushko had signed a contract to be with the U.S. Marine Corps. "It's a devil's contract if you look at it that way," he says.

How does he feel about being in Toronto while other Marines are dying in Fallujah, Najaf and Ramadi?

"It makes me struggle with doubt, you know, about my decision," says Felushko.

What does he say to the families of the American troops who have died in Iraq?

"I honor their dead. Maybe they think that my presence dishonors their dead. But they made a choice the same as I made a choice," says Felushko. "My big problem is that, if they made that choice for anything other than they believed in it, then that's wrong. Right? And the government has to be held responsible for those deaths, because they didn't give them an option."

Felushko's father is Canadian, so he has dual citizenship, and he can legally stay in Canada. But it's not that easy for other American deserters.

Canadian law has changed since the Vietnam era. Back then, an estimated 55,000 Americans deserted to Canada or dodged the draft. And in those days, Canada simply welcomed them.

But today's American deserters, such as Brandon Hughey, will need to convince a Canadian immigration board that they are refugees.

Hughey volunteered for the Army to get money for college. He graduated from high school in San Angelo, Texas, just two months after the president declared war in Iraq.

What did he think about the case for going to war? "I felt it was necessary if they did have these weapons, and they could end up in our cities and threaten our safety," says Hughey. "I was supportive. At first, I didn't think to question it."

"I found out, basically, that they found no weapons of mass destruction. They were beginning to come out and say it's not likely that we will find any -- and the claim that they made about ties to al Qaeda was coming up short, to say the least," says Hughey. "It made me angry, because I felt our lives were being thrown away as soldiers, basically."

When Hughey got orders for Iraq, he searched the Internet and found Vietnam era war resisters willing to show him the way north. In fact, they were willing to drive him there, and a Canadian television news camera went along.

Hughey had an invitation to stay with a Quaker couple that helped Americans avoid the draft during Vietnam. From Fort Hood, Texas, to St. Catherine's in Ontario, Canada, Hughey crossed the border, duty free.

Pelley read letters about Hughey's desertion that were sent to the editor of a San Antonio newspaper.

"It makes me sad to know that there's that much hate in the country," says Hughey. "Before I joined the Army, I would have thought the same way. Anyone who said no to a war, I would have thought them a traitor and a coward. So, in that essence, I'm thankful for this experience, because it has opened my eyes and it has taught me not to take things on the surface."

However, he adds: "I have to say that my image of my country always being the good guy, and always fighting for just causes, has been shattered."

Hughey, and other deserters, will be represented before the Canadian Immigration and Refugee Board by Toronto lawyer Jeffry House.

His clients will have to prove that, if they are returned to the United States, they wouldn't just be prosecuted for what they did -– they would be also be persecuted. How will House make that claim?

"People should have a right to say, 'I'm not fighting in that war. That's an illegal war. There's illegal stuff going on the ground. I'm not going,'" says House. "And anyone who says soldiers should go to jail if they don't fight in an illegal war is persecuting them."

And it's something House has experience with. In 1969, he graduated from the University of Wisconsin, got drafted, and spent the rest of his life in Canada.

House's legal strategy will focus on his contention that President Bush is not complying with international law. But how will he defend volunteers who signed a contract?

"The United States is supposed to comply with treaty obligations like the U.N. charter, but they don't," says House. "When the president isn't complying with the Geneva Accords or with the U.N. charter, are we saying, 'Only the soldier who signed up when he was 17 -- that guy has to strictly comply with contract? The president, he doesn't have to?' I don't think so. I don't think that is fair."

The first deserter to face the Canadian refugee board is likely to be Spc. Jeremy Hinzman of Rapid City, S.D. He joined the military in Jan. 2001, and was a paratrooper in the 82nd Airborne.

He wanted a career in the military, but over time, he decided he couldn't take a life. "I was walking to chow hall with my unit, and we were yelling, 'Train to kill, kill we will,' over and over again," recalls Hinzman. "I kind of snuck a peek around me and saw all my colleagues getting red in the face and hoarse yelling -- and at that point a light went off in my head and I said, 'You know, I made the wrong career decision.'"

But Hinzman said he didn't want to get out of the Army: "I had signed a contract for four years. I was totally willing to fulfill it. Just not in combat arms jobs."

While at Fort Bragg, Hinzman says he filled out the forms for conscientious objector status, which would let him stay in the Army in a non-combat job.

While he waited for a decision, he went to Afghanistan and worked in a kitchen. But later, the Army told him he didn't qualify as a conscientious objector, and he was ordered to fight in Iraq.

Hinzman decided to take his family to Canada, where he's been living off savings accumulated while he was in the military.

Wasn't he supposed to follow orders? "I was told in basic training that, if I'm given an illegal or immoral order, it is my duty to disobey it," says Hinzman. "And I feel that invading and occupying Iraq is an illegal and immoral thing to do."

"No, you wouldn't. I think there are times when militaries or countries act in a collectively wrong way," says Hinzman. "I mean, the obvious example was during World War II. Sure, Saddam Hussein was a really bad guy. I mean, he ranks up there with the bad ones. But was he a threat to the United States?

Still, isn't it worth fighting to free the people of Iraq? "Whether a country lives under freedom or tyranny or whatever else, that's the collective responsibility of the people of that country," says Hinzman.

Hinzman and the other American deserters have become celebrities of sorts in the Canadian anti-war movement.

Only a few of the reported 5,500 deserters are in Canada, but House says he's getting more calls from nervous soldiers all the time.

Wouldn't the right and honorable thing for deserters to do be to go back to the United States, and turn themselves in to the Army?

"Why would that be honorable?" asks House. "(Deserters signed a contract) to defend the Constitution of the United States, not take part in offensive, pre-emptive wars. I don't think you should be punished for doing the right thing. What benefit is there to being a martyr? I don't see any."

Hinzman began his hearing before the Canadian Immigration and Refugee board last Monday. But there's no telling when he'll find out if he'll be allowed to stay in Canada -- or be sent back to the United States to face the consequences.