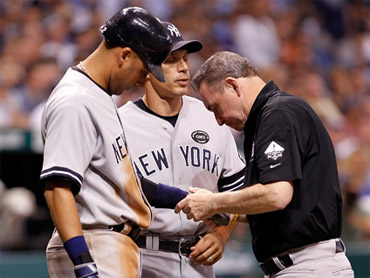 (CBS/AP) Derek Jeter has a bit part in a box-office hit, and he's putting those acting skills to good use.

The New York Yankees captain, with a cameo in the Will Ferrell comedy "The Other Guys," gave an Oscar-worthy performance by pretending to get hit by a pitch in a pennant race game Wednesday night.

Howling, hopping and hurting — seemingly, anyway — Jeter even got the team trainer to examine his left arm. And then the All-Star often hailed as a model of good sportsmanship took his base.

More like stole it, fans in Tampa Bay hollered.

Replays clearly showed what really happened: Chad Qualls' fastball squarely struck the knob of Jeter's bat, not him. But Major League Baseball doesn't use instant replay in these situations.

Olympic swimmers suit up for London

For more than a century, ballplayers have tried to bend the rules. Pitchers throw spitballs, outfielders fake catches on balls that bounce, shortstops make phantom tags. This isn't golf, where players are expected to call penalties on themselves.

Yet seeing the squeaky-clean Jeter involved in Yankee hanky-panky was startling. So was his response. Asked where the ball hit, he readily admitted his sleight of hand.

To his legion of admirers, Derek's deke was a savvy play. The bat flew, he spun around, doubled over and convinced the home-plate umpire he'd been plunked. He wound up scoring a key run in the seventh inning.

To Jeter's detractors, it was a cheap trick.

"I would never do that," Tampa Bay Rays catcher John Jaso said.

Tampa Bay manager Joe Maddon argued so much he got ejected, though he praised Jeter after the Rays rallied past the Yankees 4-3 into first place in the AL East.

"There's several thespians throughout baseball," Maddon said. "I thought Derek did a great job, and I applaud it, because I wish our guys would do the same thing."

Both the Yankees and Rays were off Thursday, but Jeter Theater played throughout the majors.

On the Cincinnati Reds' telecast of their game against Arizona — a matchup with no direct connection to what occurred at Tropicana Field — there was a fan text poll with this question: Are you OK with the Derek Jeter play? Fans were split on whether it was gamesmanship or farce.

"Hell, yeah, he did the right thing," Torre, Jeter's longtime manager with the Yankees, said in San Francisco. "It's not like running a red light. Stuff you can do out on the field, whether you can get away with it, it's not being immoral. We allow people to steal second base. Anything you can get away with is fine. To me, that's above board. It's not like he's loading his bat."

Michael Wilbon of "Pardon the Interruption" said he thought the acting was "fair" but noted that the highly regarded Jeter probably gets more leeway than others.

"If A-Rod had done the same thing, the back pages would go wild," Wilbon said.

Meanwhile, Wilbon's colleague, Tony Kornheiser, said he wished Jeter had come clean on the field rather than in the locker room

"Maybe I overestimated him," Kornheiser said.

Batters often try to pretend they've been hit by pitches that just miss; it's something they're taught to do. But it usually takes them a split-second to start acting, and that rarely tricks the umps.

Jeter, however, got right in character, especially after the ball hit the bat and sent vibrations up his arm. He fooled home-plate umpire Lance Barksdale, then managed to sneak a peek to watch Maddon's dispute.

"What can you do? My job is to get on base. He said it hit me, so I'm not going to argue with him," Jeter said.

Jeter's impeccable reputation for fairness and honesty might have helped him sell the call. Next time, pleading his case might not be so easy.

A former World Series MVP, the 36-year-old Jeter currently is stuck in one of the worst slumps of his career. With his team trailing by a run, he would take anything.

"I've been hit before when they said it hit the bat. It goes both ways," he said.

While the four umpires huddled to discuss the call, Maddon was certain the ball had nicked Jeter's bat and rolled out near the pitcher's mound. Maddon told Qualls to retrieve the ball and throw to first base, to get Jeter out.

No luck there, either.

"Basically it hit the knob and it was a fair ball, and he was out at first. That's all there is to it," Qualls said. "He's Derek Jeter, but you know what? It's still the game of baseball and he was out, and that's the play that should have been called."