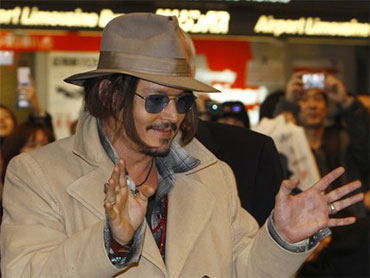 Depp, best known for his Oscar-nominated role as Captain Jack Sparrow in Disney's "Pirates of the Caribbean" blockbusters, made the comments Sunday night before receiving a career achievement award at the Bahamas International Film Festival.

"Whenever anybody say they are going to give me some kind of award, I'm always a little stupefied by the notion. The first thing I say is 'why?'," Depp told a small scrum of reporters. "I just go to work like anyone else, except my job happens to be a little stranger."

Lit by cameras during a red carpet event, Depp said he planned on spending Christmas on his private island ringed with white sand off Exuma.

"The place is as close to paradise as anywhere you can get," said Depp, wearing a black pinstriped suit and tinted glasses with heavy black frames.

Fellow acting superstar Sean Connery, who also owns a home in the Bahamas, presented Depp with the award at the Balmoral Club in Nassau.

The festival's founder, Leslie Vanderpool, described Depp as an "icon" who is one of the finest actors of his generation.

"What makes this tribute to Johnny even more special is that he has a home in the Bahamas and possesses a true love and appreciation for the region and culture," Vanderpool said in a statement.

Depp said he's enjoyed playing all of his screen characters.

"I'm still amazed I get jobs after all this time," he quipped.