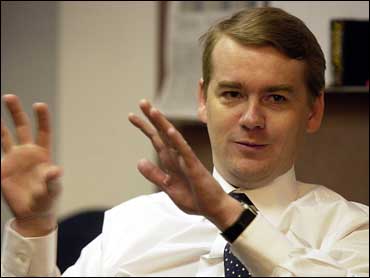 Colorado Gov. Bill Ritter on Saturday appointed Denver's public schools superintendent to fill a Senate vacancy that will be created by the promotion of Sen. Ken Salazar to interior secretary in the Obama administration.

The move surprised many Republicans and Democrats, who considered schools superintendent Michael Bennet a dark horse candidate for the Senate spot because of his lack of legislative experience. He has never campaigned for or held public office.

Salazar's nomination to head the Interior Department will be considered by the Senate.

Ritter praised Bennet as a proven leader and problem-solver in the both public and private sectors.

"This is a critical time in history. The economic challenges facing America and Colorado are unprecedented," Ritter said in a written statement.

"Our challenges are so serious that it will take a new generation of leaders, a new way of thinking and a bold new approach to problem-solving to steer us through this."

The Wesleyan and Yale-educated lawyer in 2003 was tapped to be chief of staff for Denver Mayor John Hickenlooper, who then encouraged him to apply for the superintendent job for the 150-school city system two years later.

In June 2005, the Denver Board of Education unanimously appointed him superintendent of Denver Public Schools after he promised to provide each school with a highly skilled faculty and was able to get teachers to support merit pay. He also promised to track student progress and provide help.

The school board said Bennet delivered and students made strong improvements in reading, math, writing and science.

Colorado Republican Party chairman Dick Wadhams said the seat was already being targeted in 2010 by both parties, but he said the choice of Bennet was "perplexing."

"There are some admirable things Bennet did with Denver Public Schools, but he'll be judged by what he does in the Senate. There are major issues coming up this year, and he'll have to vote on tax increases and bailouts. Those votes will define Michael Bennet," Wadhams said.

Political consultant Floyd Ciruli said Bennet is a risky choice for Democrats, who will have to spend millions of dollars defending that seat in two years.

"He's the one candidate on the list who has the least political experience. I don't think anyone knows his views on anything except education. This is surprising," Ciruli said.

Among the other Democrats who competed for the vacancy were term-limited state House Speaker Andrew Romanoff and Rep. Ed Perlmutter. Hickenlooper also asked to be considered. A message left for Romanoff was not immediately returned.

Salazar will stay in his seat until he's confirmed as interior secretary following Obama's inauguration, which could take several weeks.

The quiet Colorado Senate search was a marked departure from Senate searches in the two other states with Senate vacancies.

In Illinois, Democratic Gov. Rod Blagojevich faces federal charges of seeking bribes in exchange for his appointment to Obama's Senate seat. Blagojevich has insisted he did nothing wrong and named an Obama replacement Tuesday, former state Attorney General Roland Burris.

In New York, where Sen. Hillary Clinton has been tapped as secretary of state, the high-profile search includes Caroline Kennedy.