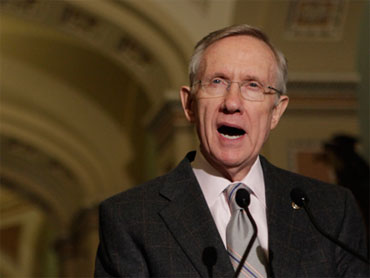 It's an annual ordeal for many seniors living on a budget.

Medicare's coverage gap for prescription drugs - $3,610 next year - has steadily gotten bigger since the benefit's inception. But if Democrats have their way on health care overhaul, the dreaded "doughnut hole" will shrink by $500 right away and go away altogether by 2019.

With the elderly worried that Medicare cuts in the health care bill will put the quality of their own care in jeopardy, Democrats belatedly are scrambling to convince them otherwise. Lawmakers are eager to make amends with a pivotal political constituency ahead of next year's midterm elections.

"I personally am committed to fully closing the doughnut hole once and for all," Majority Leader Harry Reid, D-Nev., said on the Senate floor. "The legislation we will send to President Obama for signature will make good on his promise, and ours, to forever end this indefensible injustice for America's seniors."

Lawmakers say they expect the pharmaceutical industry to pick up the cost, adding at least $20 billion more to the $80 billion the companies have pledged toward the overhaul. Drugmakers have separately offered a 50 percent discount on brand name drugs in the coverage gap, already incorporated in the legislation.

Several senators said the expectation that the industry would ante up more was a factor this week when the Senate killed an effort to allow consumer access to low-cost prescriptions from abroad. Following the Obama administration's lead, more than a dozen Democrats who previously had backed drug imports switched sides on the vote.

Whether the gambit will work with seniors is another matter.

"It's a trade-off in the minds of seniors," said Robert Blendon, a Harvard School of Public Health professor who follows opinion trends on health care. "The question they have to ask is whether they're better off if Medicare stays the way it is with no change, or if the bill is enacted with the (Medicare) cuts - but they get the doughnut hole filled."

The prescription benefit was proposed by former President George W. Bush and passed by a Republican-controlled Congress. Intended as a cost saver, the coverage gap was unpopular from the beginning - and hard to understand. AARP, the seniors lobby, says the gap is the one issue it hears the most about from members.

After an initial deductible and copayments, Medicare currently covers the first $2,700 in annual prescription costs. Then comes the gap, and beneficiaries are on their own. Finally, after seniors reach $6,154 in total drug costs, Medicare coverage kicks in again and beneficiaries only have to pay 5 percent of the bill.

Because the size of the gap is indexed to increases in drug costs, every year it grows more rapidly than the incomes of most seniors.

While those with low incomes are protected, about one-fourth of other seniors in the program - 3.4 million people - currently fall into the gap.

Anna Bollerman, a retired real estate broker, found herself pleading with doctors for free drug samples and maxing out her credit cards when she wound up in the doughnut hole this year.

"It put me in a position where I was totally embarrassed because I had to beg for medicine," said Bollerman, 80, of Bayville, N.J. She's coping with diabetes and a serious degenerative condition that affects her eyes.

A 90-day supply of one of her medications costs $1,496 when she's in the doughnut hole, said Bollerman. Her monthly income is a little over $1,500.

"All my life I was independent, and this is what I'm left with?" she said. "Whoever thought of this, it wasn't a very good idea."