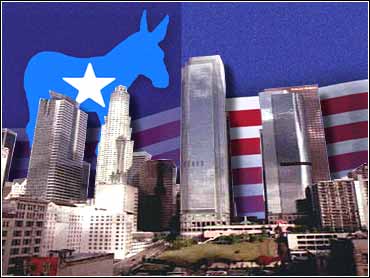 The Democratic National Convention in Los Angeles will be important to Al Gore's effort to refine his image and spell out a message that's different from Clinton's without breaking with the administration. That's traditionally a tricky task for a vice president trying to succeed to the White House.

Aides and convention officials on Saturday disclosed plans for a convention with daily themes echoing messages Gore will address in campaign stops when he works his way across the country.

By coupling campaign events across the country with convention themes, aides hope to increase attention to the campaign in an era where television coverage of conventions is minimal.

The DNC opens Aug. 14 with a theme of "Prosperity and Progress." Speakers, including Clinton, will laud the strong economy that the Clinton administration leaves after eight years.

Other first night orators will be women Senate candidates, among them New York Senate candidate Hillary Rodham Clinton. Convention officials said the night also will feature ordinary women who have gained from the economic prosperity.

"You Ain't Seen Nothing Yet" will be the theme on August 15 which builds on Gore's proposals. Speakers include Caroline Kennedy Schlossberg, former Gore rival Bill Bradley and the Rev. Jesse Jackson.

Gore is to arrive at the convention on August 16. The theme will be "Al Gore: The Principled Fighter," outlining what convention officials said is Gore's history of taking on special interests. It will feature Gore's daughter, Karenna Gore Schiff, a campaign adviser who has emphasized enlisting young people into the political process.

Finally, the big night of Aug. 17, when Gore will deliver an acceptance speech intended to define his campaign. Tipper Gore will introduce her husband. Aides said it is unique, meant to stress a partnership between the two.

Gore comes to southern California on August 15 to meet with Clinton outside Los Angeles for what a campaign aide said will be a "symbolic passing of the baton."

The meeting will be similar to former President Ronald Reagan's handing over the torch to his vice president, George Bush, in 1988. Campaign aides said unlike the Reagan-Bush event, the Gore exchange will be at a function where policy proposals will be made. "It will be a substantive event," an aide said.

Gore moves from the convention to a boat trip through the politically crucial Midwest, which Gore's campaign advisers expect to be the election's biggest battleground.

The boat trip will be on the Mississippi River and the Great Lakes.