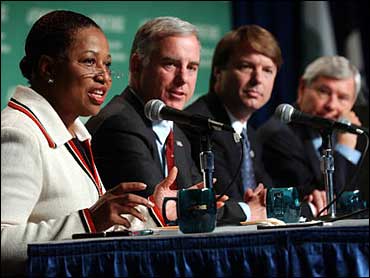 With President Bush now officially a candidate, Democrats seeking their party's nomination to run against him shifted their fire from each other Saturday and aimed instead at the president.

Seven of the nine rivals to represent their party in next year's elections appeared at a forum sponsored by union activists, a major pillar of the Democratic base. Virtually all charged that Mr. Bush is pushing tax cuts for the rich as the nation's economy staggers and budget deficits swell.

"They honor wealth; we honor the work that creates wealth," North Carolina Sen. John Edwards said. "The president says he wants a debate about values. We're going to give him that debate."

Whoever the Democrats nominate, the candidate will face the daunting task of challenging a sitting president armed with the power to command attention and raise money. Mr. Bush took the first step in a meticulously planned election effort Friday by filing papers that established his campaign committee.

The Democrats lost no time in going after him in the state where caucuses in January amount to the first major test of presidential possibilities.

"We've lost a lot in the last 2½ years," said former Vermont Gov. Howard Dean. "This president's prescription for everything is take two tax cuts and call me in the morning."

Democrats are working hard to shift the debate from Iraq and terrorism to domestic issues such as health care and the lagging economy. Those issues dominated Saturday's "town hall meeting" sponsored by the American Federation of State, County and Municipal Employees.

Drawing a bead on the Mr. Bush administration, former Illinois Sen. Carol Moseley Braun said: "This crowd is into fighting the needy and helping the greedy."

"As this debate moves forward, people are going to begin to notice that Democrats have a very different view than this president," said Missouri Rep. Dick Gephardt. "He has one program: tax cuts."

Another hopeful, Massachusetts Sen. John Kerry, was scheduled at events in New Hampshire, the first primary state, but planned a telephone link to Saturday's Iowa forum. He rolled out his $80 billion plan to overhaul health care in Des Moines on Friday, when most of the discussion was about differences between his proposal and other Democratic packages.

Kerry did take a shot at Mr. Bush as well:

"Under this president, America is off course. Time and time again, he has chosen to protect the privileged at the price of progress for the whole nation."

At Saturday's union event, Ohio Rep. Dennis Kucinich catered to the crowd with a plea to "bring back jobs to America."

Connecticut Sen. Joe Lieberman is an observant Jew who does not campaign on Saturdays, but he sent a videotaped interview with union leaders.

The challenge for the Democrats is to contend with a sitting president whose approval ratings remain high despite the stagnant economy. The surveys that show that also reveal that few are familiar with Mr. Bush's Democratic rivals.

With the presidential election nearly 18 months away, Gephardt said voters will begin to tune in over time. Democrats must not be cowed by Mr. Bush's poll numbers, he said, but focus on differences.

"I'm trying to offer a clear choice," said Gephardt. "I tell people that if they like the Mr. Bush tax cuts, they ought to vote for him."