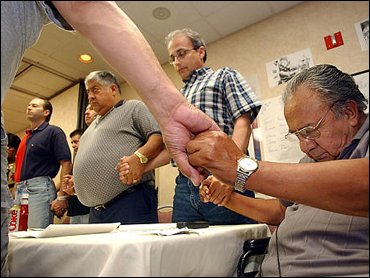 The case of the fugitive Texas House Democrats has taken a bizarre twist with political accusations that U.S House Majority Leader Tom Delay, R-Texas, misused federal power in a failed attempt to track down the lawmakers.

CBS News Correspondent Bob Orr reports the charges are coming from Democrats on Capitol Hill, who say Homeland Security resources were used to search for an airplane belonging to the leader of the Texas Democrats, former speaker Pete Laney.

Homeland officials in a statement released Thursday, say they were asked Monday afternoon to look for the plane. The request came from a Texas Department of Public Safety officer who said, "We got a problem. We had a plane. It had state representatives in it and we cannot find this plane."

Under the impression they were looking for a missing or crashed airplane, a Customs control center in California mounted a search. Federal officials never did locate the plane.

Texas congressmen strongly suggested the call to the feds was prompted by DeLay, a proponent of the Texas redistricting plan that sparked the Democrats' walkout in the first place.

DeLay's office denied the charge. A spokesman for the majority leader said he was asked by the Texas speaker to ask the U.S. Justice Department if federal resources could be used to return the missing lawmakers. But DeLay's spokesman said the congressman had no further involvement and is not even sure if Justice answered the inquiry.

Homeland Security officials say they do not know who was behind the request from the Texas public safety officer. But federal officials say the police in Texas "have a lot of explaining to do."

The 51 Democratic lawmakers secretly left Texas on Sunday night to prevent Republicans from pushing through a bill that would redraw boundaries for U.S. congressional districts that were already adjusted once after the 2000 census.

The Democrats say they're not coming back until House Speaker Tom Craddick removes redistricting from the House agenda or until Friday — when it's too late under the rules to consider it.

House rules allow for the arrest of members who intentionally thwart a quorum — which requires at least 100 of the body's 150 members to be present.

Meanwhile, the Democrats are whiling away their days at a Holiday Inn in Ardmore, Okla., chatting on cell phones by the pool, snacking at Denny's and caucusing in a conference room.

The standoff compelled the speaker to adjourn the House on Wednesday so Republicans could do committee work. Republicans are furious the redistricting bill and hundreds of others are being lost to the ticking clock; the regular session ends June 2. "This is not democracy, it is extortion," said GOP Rep. Dianne White Delisi.

Republican Gov. Rick Perry accused the Democrats of jeopardizing bills that address the multibillion-dollar state budget, children's health care and homeowners insurance. "I don't think the people of the state of Texas appreciate the work stoppage, the walking away from the important issues of the day," he said.

Others in Texas and Oklahoma are hailing the Democratic House members as heroes. Dozens of Democrats have flocked to Ardmore, about 30 miles north of the state line, wearing patriotic attire and bearing fruit baskets, balloons, cookies and barbecue.

The lawmakers said they had received bandannas, whiskey and a note from country singer Willie Nelson, who wrote "Way to go. Stand your ground."

"If they (House Democrats) believe their principles are worth fighting for, and they have only one means to fight for them, it's difficult to fault them for it," the Houston Chronicle said in an editorial.