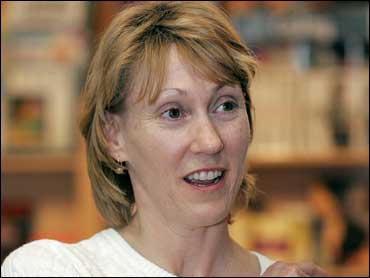 Housing tracts in farm fields aren't the only odd sights showing up in spreading exurbs like this one north of Columbus. Democrats are venturing out here, too, giving the party hope it can win battleground states by at least diluting these local Republican strongholds they know they can't win outright.

"It's still pretty shaky because it's a new idea. Democrats in Delaware County is a real new idea," says Linda Shearer, a gallery owner and Democratic activist. "The law of averages would point out that even if you win over one or two people, you have to start at the grass roots."

National Democrats, sensing an opportunity, have started sending campaign workers into these fast-developing areas, where Democrats got blown out in 2004.

"The exurb counties are going to be critical," says Ed Helvy, chairman of the Democratic Party here in Delaware County. Four years ago, he says, John Kerry steered clear of such areas, "thought he could just grow the base and win the election and that didn't happen."

Nationwide, exurban areas - far-flung residential areas out beyond the traditional suburbs - grew about 31 percent during the 1990s, according to a Brookings Institution analysis. That's twice the rate of their respective urban centers. Delaware County grew by two-thirds in that decade, according to the Census Bureau. Between 2000 and 2006, the county increased 43 percent.

Developers in Delaware County have bought farm fields and built compact neighborhoods of similarly designed homes on tiny lots, separated from other developments by more farmland. Mom-and-pop retailers struggle to keep up with chain stores, such as Wal-Mart and Best Buy, that pop up in the sprawling fields.

Democrats see a spread from nearby Columbus as a key to their success, as state employees roll down Interstate 71 to work during the day and return to sleep in residences on cul-de-sacs and in farmhouses at night. This town, where a main street is filled with family owned businesses and Ohio Wesleyan University students, also is home to big-box manufacturing facilities that have sprouted up in former fields.

It's like other fast-growing areas that are filled with new developments as farmers find housing tracts more valuable than corn, and families turn away from the traditional and sometimes decaying suburbs.

So Democrats in battleground states and those that are less competitive have sent resources into these places. Reliably red Indiana added a Democratic spokesman to challenge the Republicans who control the governor's office and the state House.

"In 2006, we took back a congressional seat, against all odds, away from a 10-year Republican incumbent," said Tim Longmeyer, chairman of the Louisville Democratic Party. "If you can cut loss margins in certain areas and pull out Democratic voters in areas that haven't really been tapped in recent years and increase the margins of wins, you can flip them."

There's similar long-range planning in Mississippi, where the state party used to have just one staffer. The DNC funded four new full-time positions and took back the state Senate in 2007.

Mississippi Democrats, who saw Kerry lose by 19 points in 2004, won four of five special elections in state legislative races during the past two years but still recognize it's unlikely they will turn the state to Barack Obama.

"We've been able to go into 70 counties and do training and identify new volunteers who are willing to work for the purpose of the party and the campaigns," said Keelan Sanders, executive director of the Mississippi Democratic Party. "There are counties that people view as heavily Republican, but we're working to give them reinforcements."

Democrat Travis Childers beat Greg Davis in a special election in May to replace Mississippi Republican Roger Wicker, who served in the U.S. House since 1994 and was appointed to the U.S. Senate to fill the seat vacated by Trent Lott. Childers' win gives him the chance over the next several months left in the seat's two-year term to raise money and gain publicity as he heads into November's general election.

Some party leaders opposed investing in these GOP-heavy areas nationally and said the money should be kept in strongly Democratic areas. In 2006, the disagreement broke into open name-calling, with Democratic Party Chairman Howard Dean clashing over money and strategy with New York Sen. Chuck Schumer and Illinois Rep. Rahm Emanuel, who ran the party's successful effort to win back control of Congress.

Republicans, who long have practiced a similar ground game focused on peeling off votes one by one, have welcomed the sniping and insisted voters won't buy what they call Democratic pandering.

"The message communicated to voters must be one that aligns with their values and beliefs," Republican National Committee spokesman Danny Diaz said. "Massive tax increases to fund bigger government, while failing to demonstrate a commitment to winning the war against radical Islamic extremism, will not result in success this fall."

Yet in central Ohio's Delaware County, where Republicans have all three county commissioners' seats, Democrats are trying to mount some form of opposition. They put forward a full slate of candidates and have a second-floor office downtown.

The county has about 11,000 registered Democrats, yet 29,000 people cast votes in the Democratic primary. Many of them were Republicans who wanted to play a role in a competitive primary in a county that supported Republican Mike DeWine's failed U.S. Senate re-election bid in 2006 by a 16-point margin.

Yet Obama and Hillary Rodham Clinton both opened offices here ahead of before Ohio's primary in March, and the Democrats see potential in similar bedroom communities.

"I have to be honest with you: When Barack opened his campaign right across the street first, and less than a week later Hillary opened up hers, I never thought I would see the day in Delaware County that I would see two presidential candidates in our downtown block," said Mel Corroto, a lifelong Democrat who owns Beehive Books along Delaware's main street.

"Obviously, it's a fierce battleground."

Tim Prindle, a music store manager in the downtown, said the election returns are going to hinge on things other than what the Democrats do. A Democrat who voted for Obama in the primary that Clinton won, he said, "I just saw a bumper sticker that said, 'When Bush took office, gas was $1.47.' Right next to an Obama sticker."