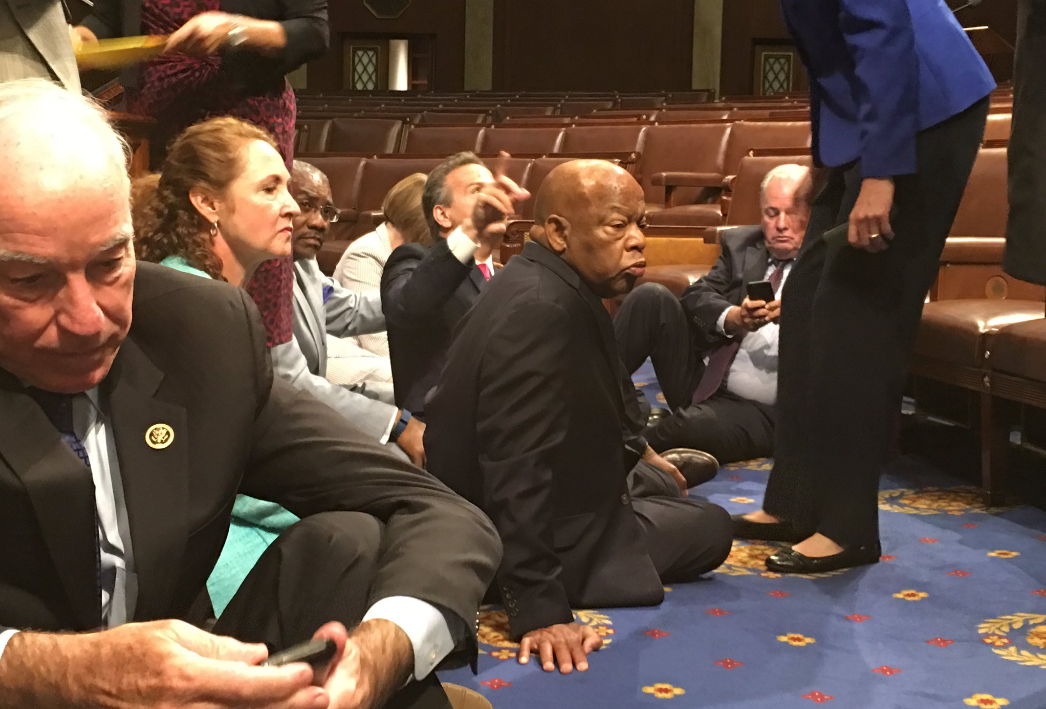 Just days after four gun control measures failed to pass in the U.S. Senate, House Democrats are staging their own historic protest on the floor of the lower chamber over firearm safety legislation.

A group of roughly 60 legislators sat down cross-legged in the middle of the House floor Wednesday, pushing for gun control votes. Some remained standing on the floor.

"We have been too quiet for too long," he added. "There comes a time when you have to say something. You have to make a little noise. You have to move your feet. This is the time."

Members took turns speaker passionately at the podium, chanting "No bill, no break" after each speech and using the trending hashtag #NoBillNoBreak on Twitter to publicize their efforts.

The originators of the sit-in also signed and sent a letter to House Speaker Paul Ryan outlining their intentions, urging the Republican leader "to keep the House in session until we have robust debate and votes on expanding background checks and banning the sale of firearms to suspected terrorists."

"Until then," the letter read, "we are resolved and committed to speaking out for victims, survivors, and families at home who deserve a vote."

President Obama thanked Rep. Lewis for his actions in a tweet Wednesday afternoon:

Other lawmakers from the Senate are also throwing their weight behind the floor sit-in.

"I think this is truly exceptional, and it reflects the American mood," Murphy told CBS News of the House protest, calling it an "unprecedented moment" in legislative history. "We ultimately got a vote in the Senate, it has led to compromised negotiations that are happening right now that might actually get this done. The only thing we can't do right now is be silent, and I'm glad that my former colleagues in the House are stepping in a big way."

Blumenthal lauded the sit-in as sending "a message to the American people that they need to rise up and be heard just as these Congressmen are trying to be heard, and to vote."

"This is the beginning of something much bigger, and it will shake the business as usual approach of the United States Congress - there's no more business as usual," Blumenthal told CBS in an interview. "The nation has reached at tipping point, Orlando sent a signal that enough is enough, and that's what they're saying."

Some Republican lawmakers were sharply critical of the protest, however.

Michigan Rep. Justin Amash slammed his Democratic colleagues for refusing to leave "until our Constitution replaces due process with secret lists."

Rep. Mark Walker, R-North Carolina, jumped in with his own critique, calling the "sit-in" a "disgrace to Woolworth's," where civil rights demonstrators held lunch counter sit-ins to protest segregation in the early 1960s.

In an interview with CBS News' Julianna Goldman, Rep. Lewis said he was "convinced" that if a vote on gun control were held on the House floor, it would pass.

"The American people are sick and tired. More than 85 percent -- some polls are saying more than 90 or 95 percent -- want action," Lewis noted. "Just let the people debate it. Let members of Congress debate it. Members of the House: let's pass it."

Democratic lawmakers' frustrations on gun control inaction boiled over in the aftermath of the shooting at an Orlando nightclub last week, when a gunman opened fire and killed dozens of people in the deadliest U.S. mass shooting in history.

The Democrats' sit-in comes a little over a week after they shouted down Paul Ryan on the floor during a moment of silence after Orlando shooting, demanding that a vote be held on gun control legislation.

Over the past five years, legislators have introduced more than 100 gun control measures in Congress. But despite numerous mass shootings in the country since 2011, none of them have passed into law, and few have made it to the House or Senate floor for a vote.

And in the latest legislative battle over firearm safety Monday, after Democrats staged a nearly 15-hour filibuster, Senate Republicans blocked four amendments that would have expanded criminal background checks before gun purchases and instituted a "no fly, no buy" policy for those on federal terror watch lists, among other policies.

After the four measures failed to advance, Sen. Susan Collins, R-Maine, unveiled legislation Tuesday to prevent terrorists from obtaining guns. Its backers say the bill could actually win over a 60-vote majority and pass through the Senate.

Meanwhile, on Wednesday, the powerful House Appropriations Committee rejected an amendment to limit the sale of firearms to those the U.S. Attorney General has a "reasonable suspicion" of being involved in terrorist activity. Democrats pushed the measure as one that could have made a real difference in Orlando, where gunman Omar Mateen had been previously investigated by federal officials for links to terrorism. Republicans, however, maintained that it violates due process rights for gun purchasers. The provision failed to pass out of committee, 16-31.

While Democrats sat on the floor of the lower chamber, the House briefly returned for legislative business at noon.

But the Republican presiding over the chamber quickly ordered the House back into recess. Democrats were asked to leave the well of the House floor, but legislators refused to budge from their positions.

"We will not be moved," Florida Rep. Kathy Castor, a Democrat, said on the floor.

A spokesperson for Ryan's office said in a tweet that the House was on recess because members were not "following the rules."

A senior House GOP leadership aide told CBS News, "This rule of the House is being enforced, as it has been since TV cameras were first installed in the House."

The aide further noted that Democrats, back in 2008 when they had control of the House, had turned cameras, lights, and microphones off during one similar GOP attempt to push for a vote allowing offshore drilling.

In protest, members on the House floor Wednesday instead took to broadcasting the proceedings from livestreaming phone app Periscope: