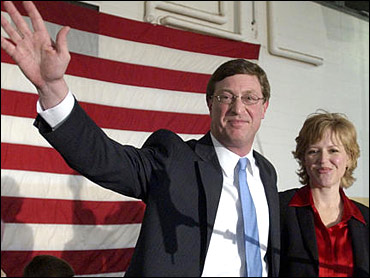 Chandler, scion of one of Kentucky's most prominent political families, defeated Republican Alice Forgy Kerr. He will fill the remainder of Gov. Ernie Fletcher's term in the central Kentucky district that includes Lexington and the state capital of Frankfort.

"I know what it's like to be on the other side and it feels pretty good to be on this side tonight," Chandler said in his victory speech at a National Guard armory in Richmond. "It's been a wild ride for me and my family the last year and a half."

In the nation's first federal election of 2004, Chandler became the first Democrat since 1991 to win a Republican-held seat in a special election. The win leaves Republicans with a 228-205 majority in the House, with one vacancy and one independent.

Some Democrats claimed the race in Bluegrass country, home to horse and tobacco farms, had national implications.

Robert T. Matsui, chairman of the Democratic Congressional Campaign Committee, said Chandler's victory was "a clear message to the arrogant Republican government in Washington that Americans are ready for a change" and that Republican policies "have totally failed to create jobs in Kentucky as in so many other states."

But state Republican Party Chairwoman Ellen Williams suggested Chandler's name recognition was the key factor. "His name was in people's minds, and that makes a big difference," she said.

Chandler presented himself as a fiscal conservative in a district that is 60 percent Democrat by voter registration but that tends to favor Republicans in federal elections. President Bush carried the state by 15 points over Al Gore in 2000.

Chandler enjoyed an advantage in name recognition because of his 12 years in state government — four as auditor, eight as attorney general — and because his grandfather, A.B. "Happy" Chandler, was twice elected governor, served in the U.S. Senate and was commissioner of baseball.

Kerr, a state senator from Lexington, based her campaign in large part on her support of President Bush, who had a 63 percent approval rating in a recent poll taken by The Courier-Journal of Louisville.

Mr. Bush made a commercial for Kerr's campaign and House Speaker Dennis Hastert stumped for her. Sen. Mitch McConnell, R-Ky., gave her $10,000 and loaned top aides to run her campaign.

Both national political parties spent money on advertising for their candidates. Democrats, who once held sway in the Kentucky congressional delegation, were down to one of six House seats. Their only incumbent, Rep. Ken Lucas, is not running for re-election.

Another special election is scheduled for June 1 in South Dakota, where Republican Bill Janklow resigned from Congress after his conviction on a manslaughter charge stemming from a traffic accident.